Trump committed to work with Congress to solve immigration crisis 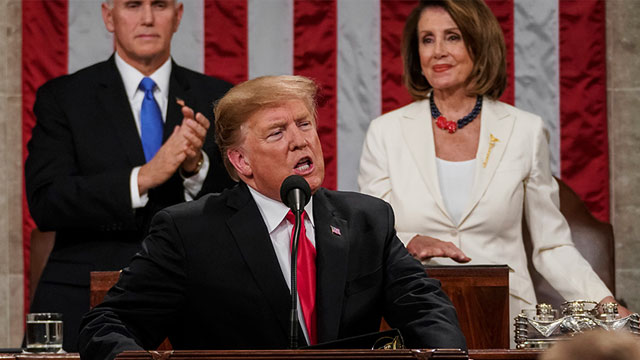 The US President Donald J. Trump is committed to working with Congress to build an immigration system that ends illegal immigration and protects our country.

President Trump is committed to working with both Republicans and Democrats in Congress to achieve real immigration reform.

Solving immigration is an important issue that impacts all aspects of Americans’ lives – from stewardship of public resources, to job markets and wages, to safety and security, and more.
Our current immigration system, however, is hopelessly outdated and jeopardizes the safety, security, and well-being of our citizens.

Congress has 10 days left to pass a bill that will fund our Government and make a meaningful impact on the undeniable humanitarian crisis on our southern border.

The President is urging Congress to pass legislation to address the crisis at the border, which includes humanitarian assistance, more law enforcement, drug detection at our ports, closing loopholes that enable child smuggling, and plans for a new physical barrier, or wall.

THE HUMANITARIAN SITUATION AT OUR BORDER:

The unabated flow of illegal immigrants to our southern border has created a humanitarian crisis that needs a solution.

Tolerance for illegal immigration is not compassionate, it is cruel. Illegal immigrants who make the trek northward are subjected to horrible conditions:

Each month, thousands of children are brought illegally to our borders, many by human traffickers and smugglers who wish to exploit them.
One in three women is sexually assaulted during the dangerous and long journey through Central America and Mexico.

Nearly 50 migrants each day are being referred for urgent medical care by our border security officials.

Failure to take appropriate steps to solve this humanitarian disaster will continue to endanger the lives of Americans.

Republicans and Democrats should be able to agree on the need to secure our southern border to protect our citizens and economy.

It also puts immense strain on our public resources, like schools and hospitals.
Tens of thousands of Americans are killed by tons of deadly, illicit drugs trafficked into our country by criminal aliens, gangs, and cartels exploiting our porous border.

The lethal drugs that flood across our border and into our communities include meth, heroin, cocaine, and fentanyl.

In two years, our immigration officers have made 266,000 arrests of criminal aliens, including those charged or convicted of nearly 100,000 assaults, 30,000 sex crimes, and 4,000 killings.
The MS-13 gang has taken advantage of our weak immigration laws and porous border and now operates in at least 20 States and the District of Columbia.