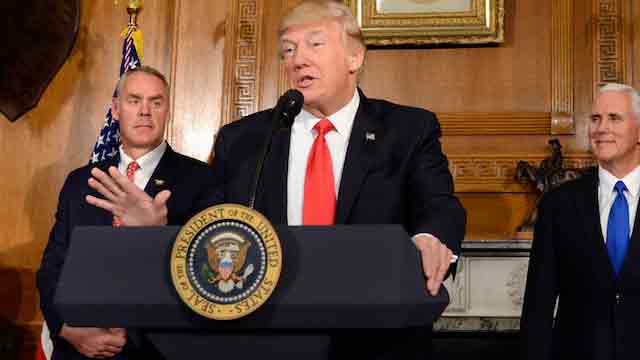 I just want to thank everybody for the fantastic job you've done and are doing. What you do, in terms of paramedics and fire and all of the other things you do that people don't appreciate like they should. But we appreciate it. And we're giving you a lot of equipment. We're giving you a lot of help. You know, we've opened it up.
So, again, thank you very much. Fantastic job. (Inaudible.) Okay? (Inaudible.) This is real power over here, right? (Laughter.) This is real power. Any questions? Go ahead?

PARTICIPANT: (Inaudible.)
THE PRESIDENT: Things are going great. That's the kind of question we like. (Laughter.)

I think our country is doing well. We're setting records with stocks. How are your 401(k)s doing, pretty well?
PARTICIPANT: (Inaudible.)

And I tell you, that tax cut bill is something with what's it's kicking in. Literally we know when the big companies -- AT&T, Comcast, so many others, Wells Fargo -- they're giving thousands of dollars to their employees. And nobody saw that happening right away, but that happened early. And n

ow what's happening is many other companies are following suit.
So the country is really -- you have a big, big beautiful ship that we're turning around. And a lot of good things are happening. You know with the military, we're rebuilding our military. It was depleted. You guys were a little bit depleted too.
We're giving you -- and particularly the police, we're giving them military equipment, which was taken away by the previous administration. You know all about that. And now you're getting the military equipment. They didn't want them to use the military equipment. Somebody will explain why. But now you have the best military equipment, and you're able to use it for the police force.
But I want to thank the job you do medically and with the paramedics -- the job you do with the fire has been incredible.
So they said, would you like to come over here and say hello? Some of you I've met, many of you down in Palm Beach.

But you do a fantastic job, so we just wanted to thank you very much. Really fantastic people. And hopefully with the media surrounding us, they'll understand exactly what's happening because we want to give these people credit for the great job they do.
So thank you all very much. We appreciate it. Now I'll go back to Palm Beach, and you go back and also watch yourselves on television, huh? (Laughter.) We created some stars in here, Chief. You know that, right?
Chief, you have any questions?

CHIEF DONATTO: Yeah, you know the House and the Senate, at record levels, passed the SAFER and Assistance to Firefighters Grants program. And that should be coming to you soon (inaudible). In your opinion, is that a good thing?

THE PRESIDENT: Well they just passed it, and it's coming to me, and it's a good thing. And you like it, right?

CHIEF DONATTO: We love it. And we just appreciate --
THE PRESIDENT: You know, one of the things that people don't understand, we have signed more legislation than anybody -- we broke the record of Harry Truman. And they were saying, if we get this big tax break -- because that's the legislation of all legislation, that's the biggest there is.

And that included ANWR, as you know. And it included the repeal of the individual mandate, which is a disaster. That's where you have the privilege of paying a lot of money so that you don't have to buy health insurance. All right? The most unpopular thing, which most people thought should have been unconstitutional. But we repealed it. And we got ANWR, which is going to be one of the great drilling sites of the world -- great oil reserves.

But we have a lot of things. But we had a lot of legislation passed. And here's an example of something that soon will be passed and signed. So yeah, we're going to take care of it. I know you folks have been fighting for that for a long time.

We had a lot of legislation pass. They were saying that if we got this one done, we would have succeeded with legislation. But I believe we have -- and you'll have to ask those folks, but I think they know the real answer -- We have more legislation passed, including the record -- was Harry Truman. That's a long time ago. And we broke that record. So we have a lot done.

In addition, we have a lot of executive orders. We've gotten a lot of the rules and regulations. You people suffered from that to a certain extent, too, in all fairness. But a lot of the regulations were voided. And now you can go back to work and do your jobs. In the case of builders, in the case of farmers, and so many others, they can now go back and do their jobs.

So that's something we can all be proud of. And that makes you all very smart. Then your families say, "Boy, you're a great investor." Right? (Laughter.) When you have big numbers go up and your stocks go up and everything else. You know when the stock market goes up that affects everybody, not just -- you know you think of the rich, you think of the big -- the fact is it affects everybody because people own stocks, whether it's in 401(k)s or otherwise. So it's really been great.

Yeah, we'll get that signed. It will to be signed. I know it will.
PARTICIPANT: We actually have 15 of those brave (inaudible) firefighters from last year's (inaudible).

THE PRESIDENT: Oh good. We have 15 of them. You know who we're talking about here? Come on over here. Come on over. That's great. (Applause.)

I better sign it. Now I have no choice, right? (Laughter.)
You love this stuff, right? Huh? That's good.

Congratulations. I'll go back and sign fast, okay? (Laughter.)
So, again, continue doing what you do better than anybody in the world. We appreciate it a lot. And the safety and the lives that you save -- incredible. Chief, thank you. And, Chiefs, thank you. Appreciate it. Thank you. Thank you. (Applause.)