Trump lashes out at ignorant and insulting statement 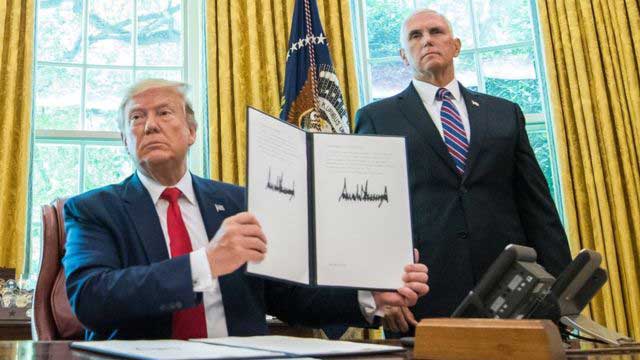 Donald Trump has lashed out at the "ignorant and insulting statement" released by Iran after the US president announced fresh sanctions against the Middle Eastern nation.

He unveiled the sanctions on Monday, saying they were a response to recent "aggressive behaviour" by Iran.

The sanctions target a number of individuals, notably Iran's Supreme Leader, Ayatollah Ali Khamenei, who Mr Trump said was "ultimately responsible for the hostile conduct of the regime".

The US has alleged Ayatollah Khamenei has access to vast wealth which helps fund the Islamic Revolution Guard Corps (IRCG). In a 2018 op-ed, US Secretary of State Mike Pompeo suggested it was as much as $95bn (£75bn) and was "used as a slush fund for the IRGC".

But Mr Rouhani questioned why the US would single out a man who he said only "owns a Hoseyniyyeh [prayer venue] and a simple house", calling the sanctions "outrageous and idiotic".

He also said it suggested the US is lying about wanting dialogue.

But Mr Trump said the only thing Iran understood was "strength and power, and the USA is by far the most powerful military force in the world".

"Any attack by Iran on anything American will be met with great and overwhelming force," he added in a tweet.

"In some areas, overwhelming will mean obliteration."-BBC