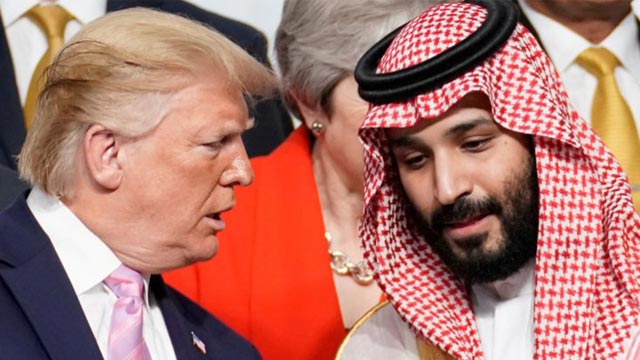 US president Donald Trump said Saturday he is ‘extremely angry’ about the murder of a Saudi journalist but that nobody had ‘pointed a finger’ at the Kingdom’s leader.

The comments came despite a recent UN expert report that judged it ‘inconceivable’ crown prince Mohammed bin Salman was unaware of the operation that assassinated Jamal Khashoggi at the Saudi consulate in Istanbul.

‘I’m extremely angry and unhappy about a thing like that taking place’ Trump said, when asked about whether he had raised the murder during talks with prince Mohammed on the side lines of the G20 meeting in Japan’s Osaka.

But ‘nobody so far has directly pointed a finger at the future king of Saudi Arabia,’ Trump added.

‘They’ve taken it very seriously,’ the US leader insisted, referring to a trial that has been criticised for secrecy and is being conducted largely behind closed doors with even the names of the suspects unknown.

‘They’ve been a terrific ally.’

Despite the international uproar over the murder, Trump has maintained friendly ties with the crown prince, and showered him with praise during the meeting on Saturday.-AFP