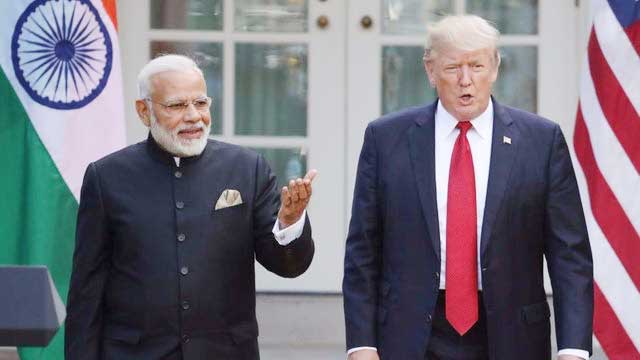 The US President Trump on Monday spoke with Indian Prime Minister Narendra Modi amid simmering tensions between India and Pakistan.

The two leaders discussed regional developments involving Washington and New Delhi and how the two nations might strengthen economic ties, according to a White House readout of the call.

"The President conveyed the importance of reducing tensions between India and Pakistan and maintaining peace in the region," the White House said.

India and Pakistan have for decades disputed the territory of Kashmir, but tensions flared earlier this year following a February suicide attack that killed more than 40 Indian soldiers in the part of Kashmir controlled by India.

When Khan visited the White House last month, Trump told reporters in the Oval Office that Modi had asked him if he would like to mediate the Kashmir dispute and that he would be willing to do so.

But India has denied making such a request, stating instead that the matter needs to be resolved through bilateral discussions with Pakistan.

Reuters noted that India's government said on Monday that Modi told Trump he is hopeful trade negotiations between the two countries will resume soon.