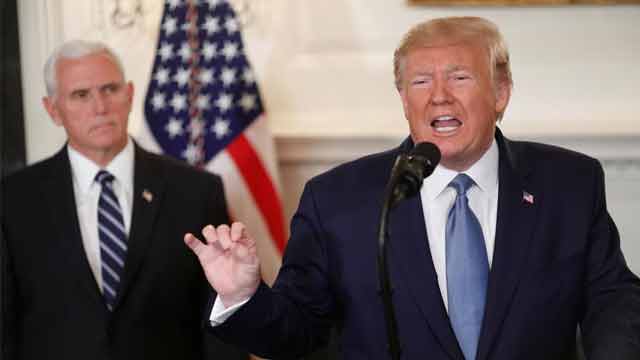 US President Donald Trump said on Wednesday Turkey was making a ceasefire in northern Syria permanent, prompting the United States to lift the recent sanctions it had imposed on Turkish imports in response to the violence.

Trump also used the White House announcement, where he was flanked by Vice President Mike Pence and Secretary of State Mike Pompeo, to declare a change of course in US relations with the Middle East, where he said too many American service members had died.

“Early this morning, the government of Turkey informed my administration that they would be stopping combat and their offensive in Syria, and making the ceasefire permanent,” he said.

“However, you would also define the word permanent in that part of the world as somewhat questionable. We all understand that.”

Trump said he had instructed Treasury Secretary Steven Mnuchin to lift sanctions imposed on Turkey in response to its moves against the Kurds in Syria’s northeast “unless something happens that we are not happy with.”

The United States would “let someone else fight over this long, bloodstained sand,” he said.

“How many Americans must die in the Middle East in the midst of these ancient sectarian and tribal conflicts?” he said. “I am committed to pursuing a different course, one that leads to victory for America.”-Reuters