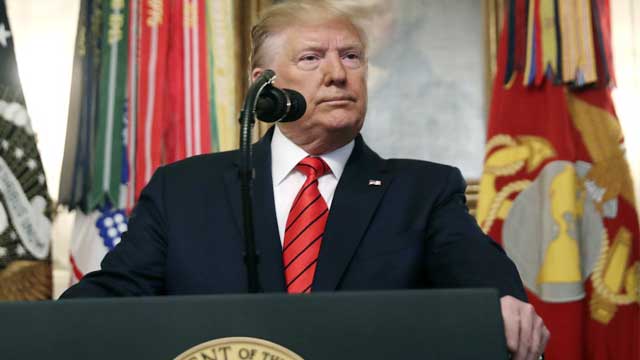 The Islamic State leader Abu Bakr al-Baghdadi has been killed by US special forces in a raid on his Syrian safehouse, Donald Trump announced on Sunday, ending a years-long manhunt for one of the world’s most wanted terrorists.

Trump said the “impeccable”, 2-hour operation was conducted on Saturday night in the province of Idlib, one of the last areas of the country still outside Syrian regime control, and that US officials had confirmed Baghdadi, 48, was among those killed.

“US special operations forces executed a dangerous and daring nighttime raid in north-west Syria and accomplished their mission in grand style,” Trump said.

The Isis leader died “running into a dead-end tunnel, whimpering and crying and screaming all the way,” he said.

Baghdadi detonated a suicide best and killed himself and three of his children, Trump said. “He died like a dog, he died like a coward. The world is now a much safer place.”

Trump said US forces were engaged with “massive firepower” as they arrived at the building where Baghdadi was sheltering with his family and associates.
Advertisement

“The compound had to be cleared at this time with people either surrendering or being shot and killed,” he said. “Eleven young children were moved out of the house and are uninjured.

“The only ones remaining were Baghdadi in the tunnel and he had dragged three of his young children with him. They were led to a certain death. He reached the end of the tunnel as our dogs chased him down.

“[Baghdadi] ignited his vest, killing himself and the three children,” Trump said. “Test results gave certain immediate and totally positive identification, it was him.”

The US president had presaged the news of Baghdadi’s death in characteristic style, inviting speculation by tweeting at 9.23pm on Saturday evening in Washington: “Something very big has just happened!”
The latest major Trump resignations and firings
Read more

The first reports broke hours later that US special forces had been involved in an operation in Idlib targeting a senior terrorist leader who was soon reported to be the Isis chief.

Unnamed officials in Ankara, Tehran and Baghdad were quoted in various media outlets, including the Guardian, confirming that Baghdadi had been killed but Trump’s announcement on Sunday morning was the first official confirmation of the Isis leader’s death.

“The thug who tried so hard to intimidate others spent his last moments in utter fear, total panic and fear, terrified of the American forces bearing down on him,” Trump said.

Among the first victims of the terrorist group and their relatives to issue reactions was Diane Foley, whose son James was among those whose deaths were filmed for gruesome snuff videos that became a trademark of the group.

“I am grateful to our President & brave troops for finding ISIS leader Al-Bagdadi,” Foley wrote. “I hope this will hinder the resurgence of terror groups & pray that captured Isis fighters will be brought to trial & held accountable.”

Trump mentioned Foley in the press conference as well as other American hostages killed in the group’s custody, Steven Sotloff, Peter Kassig and Kayla Mueller. He also referenced Muath al-Kasasbeh, the Jordanian pilot that the terrorist group burned to death.

The US fighters collected “highly sensitive material and information” before they left the site, Trump said.

He thanked the governments of Russia, Iraq, Syria and Turkey as well as the Syrian Kurdish forces for their assistance.

Baghdadi’s death is likely to be a significant fillip for Trump, who has faced withering criticism from Republicans and Democrats alike for withdrawing troops from north-eastern Syria, effectively allowing Turkey to move against the US’s Kurdish allies in the region.-The Guardian