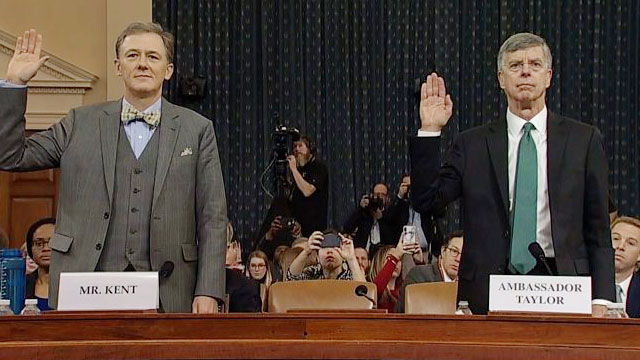 President Donald Trump directly asked about a Ukrainian investigation into his Democratic rival Joe Biden, a top US diplomat has unveiled.

Bill Taylor, the acting ambassador to Ukraine, told an impeachment inquiry that a member of his staff was told Mr Trump was keen to push for the probe.

Mr Trump says he does not recall making the remark. He denies any wrongdoing.

Mr Biden hopes to run against Mr Trump next year. It is illegal to ask foreign entities for help to win an election.

He is accused of withholding US military aid to Ukraine in order to pressure the country's new president to publicly announce a corruption inquiry into Mr Biden.

Mr Trump has called the inquiry a "witch-hunt".

What did Trump allegedly ask about?

During a detailed opening statement, Mr Taylor said a member of his staff had overheard a telephone call in which the president inquired about "the investigations" into Mr Biden.

The call was with Gordon Sondland, the US ambassador to the European Union, who reportedly told the president over the phone from a restaurant in Kyiv that "the Ukrainians were ready to move forward".

Meanwhile observers and former officials have drawn attention to the security implications of making the call from a restaurant, potentially exposing the conversation to eavesdropping by Russian intelligence.

When asked about Mr Sondland earlier this month, the president had said: "I hardly know the gentleman."-BBC