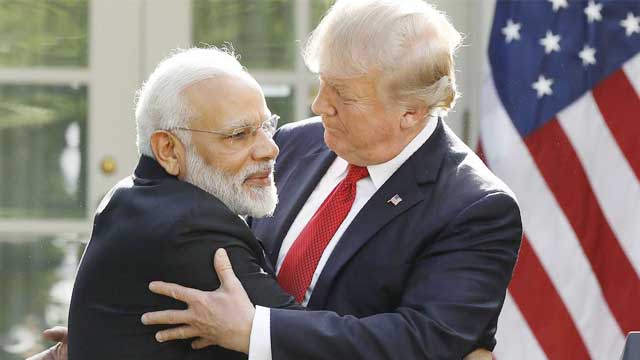 US President Donald Trump, ahead of his visit to India, claimed that Facebook has ranked him number one and Indian Prime Minister Narendra Modi number two, adding that it is a "great honour".

Trump expressed his excitement about his visit to India in a tweet on Saturday.

"Great honor, I think? Mark Zuckerberg recently stated that 'Donald J Trump is Number 1 on Facebook. Number 2 is Prime Minister Modi of India.' Actually, I am going to India in two weeks. Looking forward to it!" the tweet reads.

President Trump along with his wife Melania Trump will be on a two-day visit in India on February 24 and 25, during which they will visit Ahmedabad and New Delhi.

As per the reports, President Trump along with PM Modi are expected to give speeches at the newly built Motera stadium. Trump would inaugurate the stadium which is billed as the largest cricket stadium in the world.

The event is set to be witnessed by thousands of people in Ahmedabad.

There are multiple agreements and deals set to be tabled during the two days' meeting between the two world leaders.

India is the world's largest milk-producing nation and has traditionally restricted dairy imports to protect the livelihoods of 80 million rural households involved in this industry.

However, industry analysts are keeping a close watch on whether the trade disputes between the world's largest democracies would be resolved during Trump's visit or not.

The dispute between the two countries dates back to 2019, when the US President had suspended India's special trade designation after PM Modi had put price caps on medical equipment such as cardiac stents and knee implants. The Indian PM had introduced new data localsation requirement and e-commerce restrictions.-The Statesman