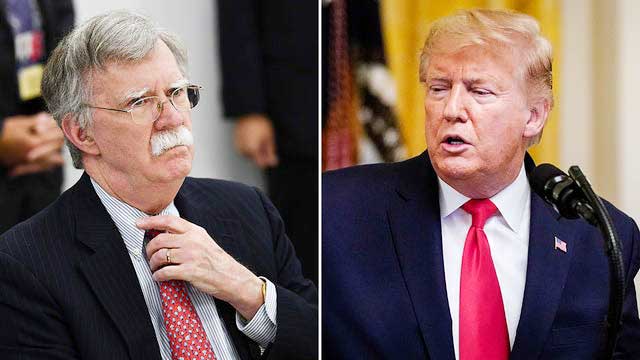 John Bolton is “a traitor” and his book should not be published before the election in November, Donald Trump reportedly told aides and media figures, according to The Guardian.

The president’s views on news of a book deal for Marie Yovanovitch, another key figure in the Ukraine scandal which led to Trump’s impeachment, were not immediately clear.

Bolton, a former ambassador to the UN, was Trump’s third national security adviser until he was fired in September last year.

He refused to testify in the House impeachment inquiry into Trump’s attempts to have Ukraine investigate his political rivals, which resulted in two articles of impeachment, concerning abuse of power and obstruction of Congress.

He offered to testify in the Senate but Republicans voted not to call witnesses during a trial which duly ended in Trump’s acquittal, despite leaks from Bolton’s book manuscript seeming to show he possessed key knowledge about the affair.

The Room Where It Happened was slated for publication in March but it has been held up, the national security council telling Bolton’s lawyer it would “move forward as expeditiously as possible” with determining what could be published.

On Friday night, the Washington Post cited two anonymous sources as saying Trump had told his own lawyers the book should not come out before the election.

Trump has attacked Bolton publicly on Twitter but the Post also reported notes of an off-the-record briefing of TV anchors on 4 February.

“We’re going to try and block the publication of the book,” Trump reportedly said. “After I leave office, he can do this. But not in the White House.

Bolton has begun to discuss his book in public. At Duke University in Durham, North Carolina on Monday, he reportedly said he was “not asking for martyrdom” but “knew, I think I knew, what I was getting into”.

He also said White House efforts to suppress his “effort to write history” were “censorship” but did not discuss what he had written in detail.

Bolton has faced criticism for choosing to write his book rather than testify in the impeachment inquiry.

At the Duke event, he answered a question about an infamous July 2019 phone call between Trump and the Ukrainian president, Volodymyr Zelenskiy, with: “You will love chapter 14.”

At Vanderbilt University in Nashville, Tennessee on Wednesday, the former Obama national security adviser Susan Rice reportedly told Bolton she could not “imagine withholding my testimony with or without a subpoena”.

“I would feel like I was shamefully violating the oath that I took to defend the constitution against all enemies foreign and domestic,” she said.

Bolton said: “I said I would testify if subpoenaed. My position is exactly the same as Joe Biden.”

Rice retorted: “Except Joe Biden didn’t have first-hand knowledge about what transpired with Ukraine.”

Trump’s pressure on Ukraine centred on unfounded allegations of corruption against the former vice-president and his son Hunter Biden. Joe Biden is a contender for the 2020 Democratic nomination.

Yovanovitch does have first-hand knowledge of much of what transpired regarding Ukraine, and in House testimony gave a chilling account of alleged threats from Trump and his allies because she was regarded as insufficiently loyal.

Yovanovitch told investigators Ukrainian officials warned her Rudy Giuliani and other Trump insiders were planning to “do things, including to me” and were “looking to hurt” her.

Pushed out of her job early in 2019, on Trump’s orders, she testified that a senior Ukrainian official told her she “really needed to watch my back”.

According to a rough transcript of the Zelenskiy call released by the White House, Trump told the Ukrainian president Yovanovitch “was bad news and the people she was dealing with in the Ukraine were bad news”.

Trump has also attacked Yovanovitch in public – including while she was testifying.

On Friday, Houghton Mifflin Harcourt confirmed that it had acquired the former ambassador’s planned memoir, which is currently without a title.

According to the publisher, the book will trace Yovanovitch’s diplomatic service from Somalia to Ukraine and “finally back to Washington DC where, to her dismay, she found a political system beset by many of the same challenges she had spent her career combating overseas”.

“Yovanovitch’s book will deliver pointed reflections on the issues confronting America today, and thoughts on how we can shore up our democracy,” the publisher said.

Asked why Yovanovitch’s book would not be published in this election year, Houghton Mifflin senior vice-president and publisher Bruce Nichols said: “Ambassador Yovanovitch has had a 30-year career of public service in many locations, with many lessons to be drawn.
Advertisement

“This is about much more than just the recent controversy.”

The Associated Press reported that the deal was worth “seven figures” and that Yovanovitch was represented by the Javelin literary agency – whose clients also include James Comey, the FBI director fired by Trump in May 2017, and Bolton.