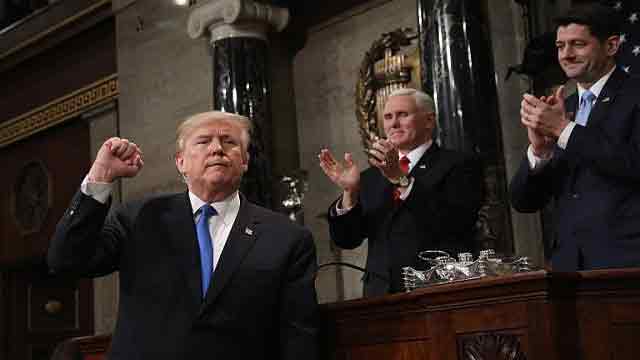 Washington, Jan 31 (Just News): The US President Donald J. Trump’s foreign policy is putting the interests and security of the American people first.

President Trump recently released his 2018 National Security Strategy, which provides the strategic vision necessary to protect the American people, preserving our way of life, promoting our prosperity, maintaining peace through strength, and advancing American influence in the world.

The Administration recognizes that economic security is national security.

President Trump is implementing policies that jumpstart job creation and strengthen our country’s economic base.

America is leading again, proving that America First does not mean America alone by revitalizing relationships with countries that share our goals and interests while combating radicalism and extremism.

President Trump is pursuing “peace through strength” by modernizing and rebuilding America’s armed forces. In the words of our Nation’s first president, George Washington: “To be prepared for war is one of the most effectual means of preserving peace.”

COMBATTING TERRORISM: Under President Trump’s leadership, the United States is defeating the terrorists who threaten our homeland and citizens.

By working with local forces and giving our commanders on the ground increased flexibility, we have almost completely defeated ISIS.

Since President Trump took office, ISIS has lost nearly 100 percent of the territory it once controlled in Iraq and Syria.

Along with our partners, we will continue to pursue the thousands of ISIS fighters who remain at large, and we will not rest until we have achieved the enduring defeat of ISIS and decimated global jihadists and their networks.

President Trump will relentlessly pursue threats to America’s security, prioritizing efforts to confront and defeat radical Islamic terror and the ideology that sustains it.

President Trump’s conditions-based South Asia Strategy provides commanders with the authority and resources needed to deny terrorists the safe haven they seek in Afghanistan and Pakistan.

The President continues to reassert American leadership among our Middle Eastern allies and partners.

This includes bringing America’s Middle Eastern allies and partners into the struggle, empowering credible voices to counter terrorist propaganda, and promoting our open society as the great alternative to repression and extremism.

President Trump is making clear to our allies that they cannot be America’s friend while supporting or condoning terror.

The President has suspended security assistance to Pakistan, sending a long overdue message to aid recipients that we expect them to fully join us in combatting terrorism.

SECURING THE HOMELAND: President Trump is securing our borders and eliminating violence from our neighborhoods.

The Administration has instituted extreme vetting and enhanced screening to make it harder for terrorists, transnational criminals, and other dangerous actors to reach our country.

Routes into the United States are now more secure, regardless of whether people travel here as tourists, business visitors, immigrants, or refugees.

The President will continue to work with international partners to ensure the safety of our citizens:

All foreign countries are now required to share critical information with the United States about their nationals, so we know who is entering our country, or face consequences. To enhance our security, the Administration has raised the baseline of security cooperation, and most countries have complied.

After the President highlighted alarming threats against Jewish schools last year, the Trump Administration worked with Israeli counterparts to find and end the source of those threats.

In addition to the domestic arrests of almost 800 MS-13 gang members, the Trump Administration has worked with Central American partners to arrest and charge roughly 4,000 members of MS-13.

REASSURING ALLIES AND DETERRING ENEMIES: The President is restoring critical alliances and working with allies and partners to confront our enemies.

President Trump is redefining America’s relationships in the Indo-Pacific by securing business and trade that benefit American workers and our economy.

President Trump will continue to rally the world to apply maximum pressure to convince North Korea to de-nuclearize.

President Trump is restoring American leadership in the Middle East, rebuilding relations with Israel and taking strong action to confront aggressors in the region.

In December, the President officially recognized Jerusalem as the capital of Israel and announced the relocation of the U.S. embassy in Israel to that city.

The Trump Administration is confronting Iran’s destabilizing behavior and the threat of its nuclear program, working to fix the serious flaws in the Iran nuclear deal, and sanctioning dozens of Iranian officials and entities.

The President is revitalizing the NATO alliance by successfully encouraging our partners to meet their defense spending commitments and share the burden of collective defense.

President Trump is pressing for reform at the United Nations, and will consider withholding funds to United Nations entities that perpetuate the dependency of millions.