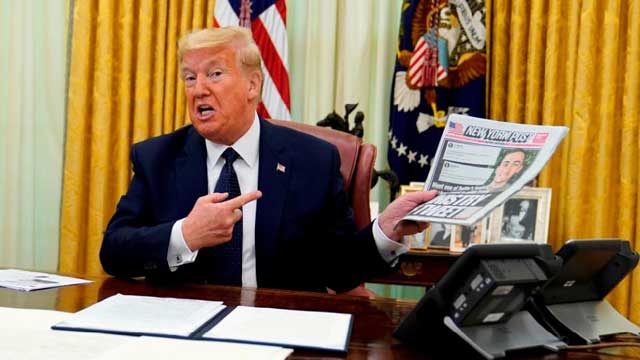 The US president is engaged in a public feud with the companies, which he has accused of censoring free speech and bias, and said: "We're fed up with it."

It comes as Twitter flagged one of Mr Trump's tweets about mail-in ballots in California with a fact-check warning.

The executive order points out that social media companies, such as Facebook and Twitter, should forgo their legal immunity from the law, should they edit users' content on their platforms.

Currently, Section 230 offers legal protections to social media platforms, and makes it clear that those companies are not responsible for the content posted on their sites, and therefore should not interfere with it.

However, they are allowed to act when content is violent or harassment.

The order will direct executive branch agencies to speak to independent rule-making agencies, such as the Federal Communications Commissioner, to look at whether new regulations can be enforced on the Silicon Valley giants.

Mr Trump argues that the fact-checking on his tweets amounts to "editorial decisions" by Twitter, and is akin to political activism.

He has long been engaged in a war of words with social media platforms, frequently saying they are silencing conservative voices online and is using his executive order to argue for freedom of speech online.

In a decisive election year for the US, it appears Mr Trump is looking to ensure that nothing stands in his path to re-election.

Experts are sceptical as to whether Mr Trump's executive order will prove to be effective without Congress passing legislation.

The president is reliant on social media, and Twitter in particular, to get his message across to his more than 80 million followers.

Next week from Monday to Thursday, Dermot Murnaghan will be hosting After the Pandemic: Our New World - a series of special live programmes about what our world will be like once the pandemic is over.

We'll be joined by some of the biggest names from the worlds of culture, politics, economics, science and technology. And you can take part too.-Sky News