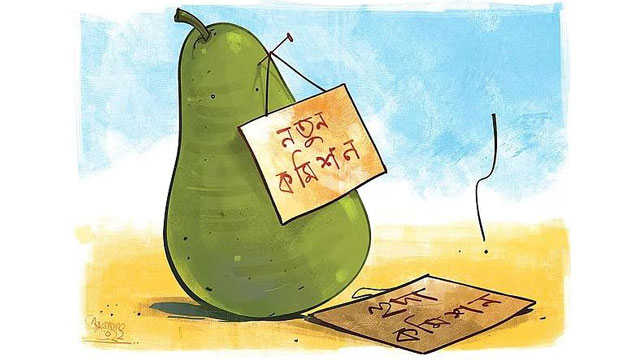 The tenure of the election commission headed by KM Nurul Huda has come to an end. At an event on Sunday, KM Nurul Huda claimed that he had been fully successful. Perhaps one day he will clarify the benchmark of his success. But in the meantime we have before us the record of the commission's performance over the past five years. There is no sign of any success there. Quite to the contrary, we see that he and his associates have not only been abject failures in carrying out their constitutional duties, but have even made the daytime voting into a nighttime affair. They have managed to make people lose all faith in the entire electoral system. Despite all these experiences regarding the election, the centre of discussion in the news media and the social media over the past few weeks has been the election commission.

Experience the world over indicates that the authoritarian regimes of competitive elections may be oppressive and repressive and may impose all sorts of control over the media, but a certain uncertainty prevails in the elections. The rulers want to resort to rigging in order to dispel such uncertainty. On the other hand, in the case of authoritarian regimes of monopolised elections, rigging in the elections is institutionalised in a manner that defuses any competition and any uncertainty is systematically eliminated.

By means of two consecutive one-sided elections, the rulers in Bangladesh have taken the electoral system to a stage where even if there is scope for competition, this will not be reflected in the election results. This institutionalisation is the biggest achievement of the Nurul Huda commission. The election system was thus given this shape by the concerted efforts of the state institutions, the civil administration and the ruling party in the 2018 election. The commission had no dearth of power and they could have prevented this if they wanted. But their objective was to give the election system this shape.

The rulers in Bangladesh now need a commission that can carry out the constitutional obligation of conducting an election. The duty of such a commission is to ensure the formalities of an election. It is in this backdrop that preparations are on to constitute the country's 13th election commission. Given the trends in the discussions that prevail, it is obvious that those in power want more than ever that this issue be discussed. And they have been successful. However, at the same time there is also the contention that it makes no difference whatsoever whether the election commission is good or bad.

The question that looms large in everyone's mind is whether the election to be held under the commission will be an actual election or an 'election' a la 2014 and 2018. Another question is whether an environment will be created conducive for the commission to hold an inclusive election. Already the process of constituting the election commission has been questioned. It is very obvious how biased the search committee will be with the list given to them of names recommended by parties close to those in power.

In discussions, eminent persons have made it clear that past experience does not lend them any hope concerning the constitution of the commission. They have voiced their expectations, but it will be of no use even if the search committee takes these into cognizance. After all, the nominations will be made from the list that has been given to them and there is no way to know the source of this list and how it was compiled. The eminent persons who are making these recommendations are also very well aware of the matter. They have simply spoken out of their duty as members of the civil society.

This commission is being formed without consulting the opposition. There is no reason to believe this commission will win the trust of the opposition. That is not what Bangladesh political culture indicates. The election commission has no lack of legal powers. However, it doesn't take a rocket scientist to deduce that anyone with the strength to implement such powers will not be the head of the commission or a majority member. From the formation of the search committee to the discussions with this committee, it is clear that such procedures will only be meaningful if the government under which the election is to be held, will not see the election as a means to remain in power or to attain power.

* Ali Riaz is a distinguished professor of politics and government at the Illinois State University in the US, non-resident senior fellow of the Atlantic Council and president of the American Institute of Bangladesh Studies.