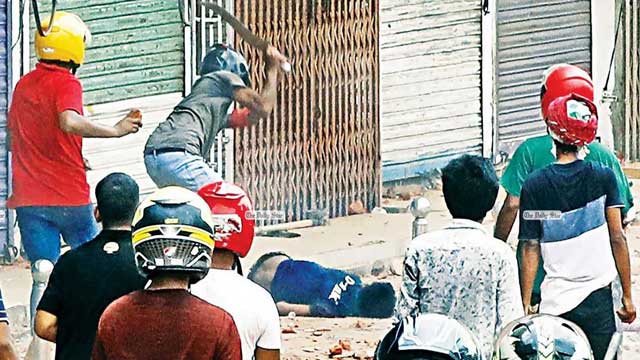 Dhaka's Chief Metropolitan Magistrate has approved of local BNP leader Maqbul Hossain being taken on three-day remand by police for attacking police, hurling brickbats and damaging property during Tuesday's clashes between students and traders in the New Market area.

Meanwhile, information is gradually coming to light about who lead the clashes, who were those in helmets, wielding large cleavers, who killed the two innocent young men Nahid and Mursalin. It is apparent that leaders and followers of four rival groups of Dhaka College Chhatra League (ruling party's student wing) were directly involved in the clashes. Does that mean the Dhaka College Chhatra League leaders and activists carried out all this violence at the orders of the local BNP leader?

We are aware of a lot of political deals and understandings in Bangladesh and there have been instances of activists leading Chhatra League to join Chhatra Dal and vice versa. But no one can cite any instance of Chhatra League leaders and workers beating up anyone, resorting to vandalism and hindering police action at the behest of a BNP leader.

The law enforcement agencies failed to halt the violence at the New Market area that day. They merely looked on as silent spectators for two and a half hours after the clashes broke out. Had the police intervened in time, Nahid and Mursalin wouldn't have had to give their lives. Nahid worked for a courier firm and Mursalin was a shop employee.

Eye witnesses said that the shopkeepers and Chhatra League activists both shouted out the 'Joy Bangla' slogan as they embroiled in the violence. Perhaps that is why the police was unable to decide which side to back. 'Joy Bangla', after all, is the national slogan.

What is the truth that the law enforcement want to extract from the BNP leader by taking him on remand? The police can certainly take action against the leaders and activists of BNP or any other party if they unleash violence, damage government property, obstruct the police from carrying out their duty. But that day the incident took place in broad daylight in front of hundreds of people. It was seen on the TV too and appeared in the newspapers. The photograph carried by the Daily Star on Tuesday showed someone in a helmet hacking Nahid with a large knife. There were six other youth behind him in helmets.

On Sunday Prothom Alo reported, "The police managed to identify two persons directly involved in hacking to death courier delivery man Nahid Hossain during the clashes in New Market area on Tuesday. They are both Dhaka College students and live in the colleges North Hall. One of them is Quayum. The police were unwilling to reveal the name of the other. Both of them are followers of a leader of the dissolved committee of the Dhaka College unit of Chhatra League.

Sources of the police's Detective Branch (DB) said they had identified the two from video footage of the clashes and from eye witness accounts. Another two have been identified from among those wielding knives on the roads on Tuesday. They were also Dhaka College students and involved in Chhatra League politics.

According to DB, Nahid was hacked by the several persons, with and without helmets. The identity of the person whose picture appeared in the news media has not been fully confirmed as yet. However, one of two possible attackers is being suspected to be the perpetrator. Prothom Alo investigations and police sources say that among the Dhaka College students who wielded sharp weapons and wore helmets during the clashes, the followers of four leaders of the Dhaka College Chhatra League dissolved committee were the most active.

Maqbul Hossain is the owner of one of the two shops whose employees had got involved in an altercation leading to the violence. Is that the justification behind taking him on remand? If he has been accused because he owns the shop, than many other shop owners should be accused too. If he ran the shop himself or his employees unleashed the clashes, it may have been said that he had instigated it. But who gave the orders to whom?

Law enforcement officials are insisting that they will identify the guilty persons from video footage. But no one seen in the video footage that has gone viral has been arrested. But the law enforcement agencies have filed cases against 24 BNP men.

So it seems that the police want to prove that the Chhatra League helmet men with their knives and cleavers who unleashed violence, attacked newsmen, grabbed their cameras, were all followers of BNP leader Maqbul. They carried out the violence upon his orders. If this narrative of the police is true, then the authority and leadership over Chhatra League should be transferred from Awami League and bestowed upon BNP.

Many strange things happen in this world. Bangladesh's law enforcement agencies have just created yet another strange happening!