Khaleda Zia couldn't leave the country, but Haji Salim could! 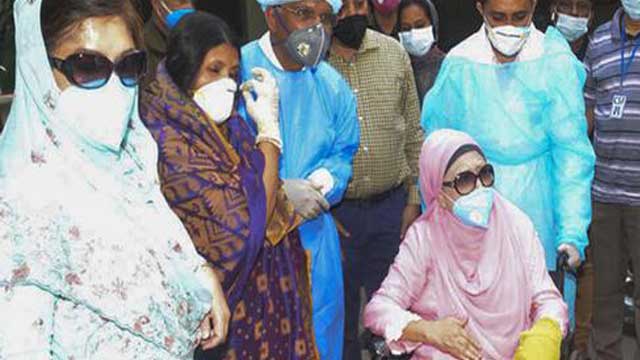 Ekushey Television created quite a stir on the eve of Eid with startling news. Member of parliament from the Dhaka-7 seat and Dhaka city Awami League leader, Haji Mohammad Salim, who is convicted in a corruption case, has left the country. Haji Salim's eldest son Sulaiman Salim confirmed this to the Ekushey TV correspondent, saying his father had gone abroad. The security guard of their house also said that Haji Salim was not in the country.

Anti-Corruption Commission lawyer Khurshid Alam Khan said that while the verdict convicting Haji Salim was in effect, he could not remain member of parliament. Retired judge of the Supreme Court's Appellate Division Justice Shamsuddin Chowdhury alias Manik said anyone convicted by the Supreme Court cannot leave the country. Those who aided him in leaving the country, have violated the Supreme Court order. In the eyes of the law, they have committed a crime.

Meanwhile, Haji Salim's lawyer Sayeed Ahmed has said that the High Court had given him a month's time to surrender. There was no bar to him leaving the country within this span of time.

Here the question arises whether a convicted person can leave the country or not. Since the higher court has kept his verdict in effect and ordered him to surrender to the lower court, that means he is convicted. He remains convicted until and unless the court issues a directive otherwise or the president pardons him. Secondly, what if Haji Salim does not return? Justice Shamsuddin Chowdhury raised this question too.

Thirdly, if Haji Salim can go abroad despite his conviction remaining intact and having orders to surrender to the lower court, then why is this rule not applicable to the BNP chairperson Khaleda Zia?

Every time BNP leaders demanded that Khaleda Zia be sent out of the country for treatment, Awami League leaders and ministers maintained that there is no scope for a convicted person to leave the country. How did Haji Salim get the scope to do so?

According to Haji Salim's lawyer, he has gone abroad for medical treatment. Can a former prime minister and opposition party leader not get the same facilities as an Awami League MP? It seems that the law is one thing for Haji Salim and another for Khaleda Zia, though Khaleda Zia has now been kept outside of the jail on executive order.

The ACC lawyer Khurshid Alam Khan said, "We have the certified copy of the verdict. According to the High Court verdict, Haji Salim will have to surrender to the lower court within 30 days from now." As a result of the conviction being upheld, Haji Salim has lost the criteria to remain MP, the lawyer contended.

The High Court upheld the 10 year prison sentence awarded to Haji Mohammad Salim on 9 March by the trial court. Justice Md Mainul Islam Chowdhury and Justice AKM Zahirul Huq signed the verdict. He was sentenced to 10 years imprisonment on charges of illegally amassing wealth. However, he was cleared of three years' imprisonment. He was told to surrender to the lower court within 30 days of the verdict being declared.

ACC filed a case against Haji Salim on 24 October 2007 with the Lalbagh police station for amassing wealth illegally. He was told to surrender to the trial court within 30 days of this verdict. On 27 April 2008, the trial court sentenced him to 13 year's imprisonment in this case.

In the case filed in 2007 by ACC, the trial court sentenced Haji Salim under two clauses, for ten years and three years. The court then kept the 10 year sentence intact and released him from the three-year sentence.

The High Court also kept the Tk 1 million fine intact. If he does not pay this fine, he will have to spend another year in jail. The verdict also said that his wealth outside his known sources of income would be confiscated by the state.

After the verdict was declared, the ACC lawyer told newspersons that Haji Salim's 10-year conviction verdict had been published. The verdict contained many observations and directives. It called upon ACC to be even sterner. About the matter of appeal, he said, "He is to surrender to the trial court within ten days of receiving the verdict and then will go to jail. He will be able to ask for leave to appeal and also appeal for bail. If the court accepts his eave to appeal, he can then appeal to the court."

The appeal filed by Haji Salim's wife Gulshan Ara, convicted for three years for illegal accumulation of wealth, became void as she died while the appeal was lodged with the High Court.

According to Article 66 (2) of the Bangladesh Constitution, if any lawmaker is sentenced to two or more years' imprisonment for moral turpitude, he or she will no longer qualify to remain MP and will not be considered qualified to become MP for five years after release.

Though the court sentenced Haji Salim 14 years ago, he has not been in jail as yet. However, Khaleda Zia was immediately placed in jail the moment her verdict was declared. BNP leader Khaleda Zia and Awami League MP Haji Salim both face corruption charges, but there are differences in their cases. Khaleda Zia's two cases are regarding transfer of funds from the Zia Orphanage and Charitable Fund. There are no allegations of misappropriation. But Haji Salim has been accused of amassing wealth by illegal means. He was given a 13-year sentence, later shortened to 10 years by the High Court. But the sentence handed down to Khaleda Zia by the lower court was increased by the High Court.

Haji Salim never had to go to jail after Awami League came to power. He applied for bail and was granted bail. Even after the High Court verdict was cancelled , the Appellate Division ordered a hearing again and this time too he was convicted.

Is not the different treatment meted out to the former prime minister Khaleda Zia and to the ruling party MP Haji Salim a matter of double standards?