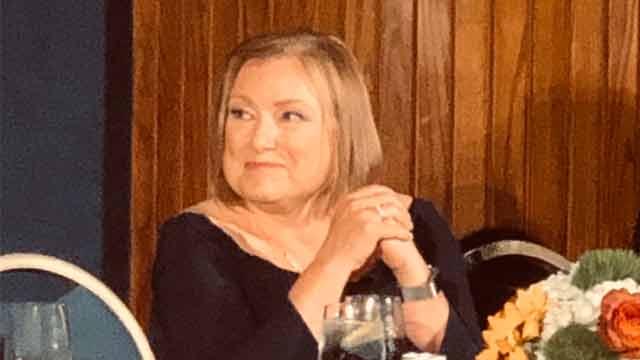 The National Press Club honored Amanda Bennett, who is capping an illustrious career in journalism as director of Voice of America (VOA), at an elegant dinner Thursday as the recipient of its 2019 Fourth Estate Award.

Sandy Rowe, former editor of the Portland Oregonian, introducing Bennett, said she had ”a profound sense of story … (commitment to) demands of excellence … and of herself, not at all.” Bennett, she said, “elevates everything she touches” and “sees you as better than you are.”

Bennett’s husband, Donald Graham, former publisher of the Washington Post, praised her “high amount of energy” and said in “any newsroom she felt at home.”

In her response, Bennett said, “Think of a world where you can believe nothing of what you see or read. A world where there is no free press is where I and my colleagues work every day.”

Speaking of VOA Bennett said, “No, we don’t do propaganda ... Never will.”

Bennett laid out some guidelines: “put aside prejudices and do the best (you) can … report fairly … write dispassionately about the opposition.” She said she found herself wanting to “recover those values.”

Club members, filling the Ballroom, rose to their feet repeatedly to applaud Bennett and other award winners including:

Aasif Sultan of the Kashmire Narrator received the John Aubuchon Freedom of the Press Award, who was honored in absentia because of the crackdown on the press in Kashmir restrained him or members of his family from attending.

Mackenzie Mays, a reporter for Politico and formerly the Fresno Bee and the Charleston Gazette-Mail in her native West Virginia, was awarded an honorable mention Aubuchon for her education and health stories, including those on sex education and sexual abuse. “People kept calling me ‘badass,’” she said, “which I considered a compliment.”

Julie K. Brown of the Miami Herald received the Sheehan Prize for Investigative Journalism, for her work, including the recent Jeffrey Epstein and sexual trafficking stories as well as exposing the deal made with Epstein by then U.S. Attorney Alex Acosta, which eventually led to Acosta’s resignation as Secretary of Labor.

President Donald Trump, who has a combative relationship with the press, was hardly mentioned during the evening – except by John Donnelly of CQ Roll Call, chairman of the club’s Press Freedom Team, in his acceptance remarks for Aasif Sultan. “The press is under siege as never before in recent memory – and the president of the United States leads the campaign,” he said.

The president’s supporters produced a video showing a fake President Trump gunning down reporters – “and the president has said nothing to repudiate this,” Donnelly said. “If a Democrat was spearheading such an assault on the First Amendment, we would be speaking out against that just as forcefully.”Source: The National Press Club, US