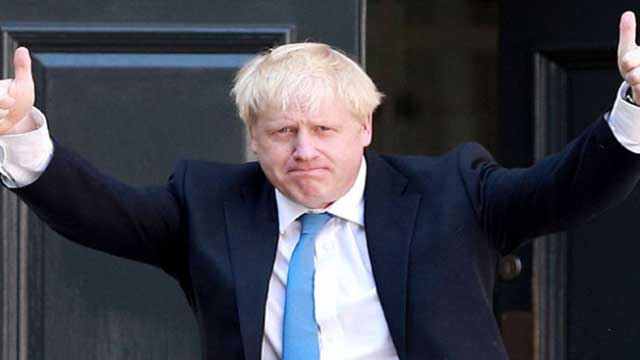 The British government has formally asked the European Union for a delay to Brexit  but also sent a letter from Prime Minister Boris Johnson arguing against it.

Johnson was forced to request a delay after Parliament voted to delay a decision on whether to back his Brexit deal. A law passed last month compelled the government to try to postpone Britain's departure if no deal was agreed by Saturday.

British media said Johnson made it clear in the correspondence that he personally opposes an extension.

France's presidential Elysee Palace says there's nothing to be gained by prolonging a decision on the Brexit accord.

The Elysee says that "a supplementary delay is in the interest of no one."

The remarks came after British lawmakers voted to delay their decision on the deal for the U.K.'s exit from the European Union, currently scheduled for Oct. 31. Prime Minister Boris Johnson is now required to ask the EU to delay Britain's departure.

French President Emmanuel Macron's office says that given that a deal was negotiated, "it's now up to the British Parliament to say if it approves or rejects it. There must be a vote on the fundamentals."

The European Parliament's chief Brexit official says expert legislators will assess the House of Commons vote Monday in the knowledge that any European Union legislative approval before the Oct. 31 deadline is extremely tight.

Guy Verhofstadt said the legislature's Brexit Steering Group meets on Monday as planned. Earlier he said the British approval process needed to be completed before the EU parliament would fully vote on it.

With time tight before Thursday's last slated session of the EU parliament, a technical extension of the Oct. 31 date likely would be needed.

The next EU plenary beyond next week would be Nov. 13, necessitating at least a two-week extension for the EU final approval.

The British government looks set to try again next week to get Parliament to back its divorce deal with the European Union, after lawmakers voted to delay the decision.

Leader of the House of Commons Jacob Rees-Mogg says the government will seek a debate Monday on its Brexit-implementing legislation that would effectively be a vote to approve the deal.

It's unclear whether that would be allowed under House of Commons rules against holding repeated votes on the same question. House of Commons Speaker John Bercow said he would make a ruling Monday.

Lawmakers voted Saturday to withhold their approval for the Brexit deal until all legislation to implement it has been passed.

In the meantime, Prime Minister Boris Johnson is required to ask the EU to delay Britain's departure, currently scheduled for Oct. 31.

Johnson is still aiming to get the deal approved by Oct. 31 so no delay is necessary.

Polish Prime Minister Mateusz Morawiecki says his country does not see Saturday's vote by British lawmakers as a rejection of the Brexit deal but rather as a delay.

Morawiecki said in a Twitter message immediately after the vote that Poland "will support a positive approach on EU level to @BorisJohnson government proposal."

He added that, for the 27 EU leaders "Avoiding chaotic, no-deal #brexit should be our top priority."

The EU leaders will have to decide on any extension to the Oct. 31 deadline.

The European Union says it is up to the U.K. government to tell the 27 EU member states "as soon as possible" what action it will take after the Brexit deal was not voted on Saturday.

EU Commission spokeswoman Mina Andreeva said the EU executive took note of the vote and did not suggest a course of action.

"It will be for the UK government to inform us about the next steps as soon as possible," she said on Twitter.

Had the deal been approved, the EU parliament had planned to back the Brexit deal by Thursday evening.

British Prime Minister Boris Johnson says he will push ahead and try to leave European Union by Oct. 31.

He said Saturday he is not daunted or dismayed by a vote delaying approval of the new Brexit deal, and said there will be no new negotiations with the EU.

He says he still believes he can command "overwhelming" support for the new Brexit divorce plan and will introduce the required legislation to make that happen.

Johnson says he is not compelled by the law to negotiate any further with the EU.

British lawmakers have voted to postpone a decision on whether to back a Brexit deal with the European Union, throwing a wrench into government plans to leave the bloc at the end of this month.

At a special session of Parliament intended to ratify the deal, lawmakers instead voted 322-306 to withhold their approval until legislation to implement the agreement has been passed.

The vote is a major blow to Prime Minister Boris Johnson and means he has to ask the EU to delay Britain's departure. Parliament previously passed a law compelling him to do that if a deal had not been passed by Saturday.

The move is intended to ensure the U.K. can't crash out of the EU without a deal on the scheduled Oct. 31 departure date.

The government still hopes it can pass the needed legislation by the end of the month so the U.K. can leave on time.

Former Prime Minister Theresa May, whose Brexit deal was rejected by Parliament three times, says she is backing the agreement struck by her successor Boris Johnson.

May told lawmakers she had a "distinct sense of deja vu" as Parliament debated whether to back Johnson's EU divorce deal. She resigned in frustration after lawmakers repeatedly threw out her Brexit agreement.

Johnson's deal is similar to May's in some ways but contains a different arrangement for maintaining an open Irish border.

May said Parliament should pass the deal and let Britain leave the EU on Oct. 31. She said "people want certainty in their lives. . If you want this country to move forward then vote for the deal today."

Protesters, many wearing blue berets emblazoned with yellow stars symbolizing the EU flag, poured out of subway trains and buses for the march to Parliament Square on Saturday.

In one side street, a group of demonstrators with bells strapped to their legs and wielding sticks performed a traditional English morris dance and chanted: "Morris, not Boris!" to cheers from onlookers.

One of the dancers, Kate Fisher, says "demos that are fun and joyful are more effective."

Elsewhere, the mood was less cheerful.

Sarah Spoor, who cares for her two children with disabilities, choked back tears as she said she is "distraught" at the prospect of Britain leaving the EU.

Thousands of Brexit opponents are gathering in central London to call for Britain to remain part of the European Union.

The crowds are planning to converge on Parliament Square as legislators are voting on Brexit departure plans put forth by Conservative British Prime Minister Boris Johnson.

Many carried signs calling for a halt to the Brexit process that started with a 2016 referendum in which British voters narrowly backed taking Britain out of the 28-nation bloc.

He says "I fervently believe that we should remain in the EU." He adds "I am British but I am also European. I don't believe the current deal offers any benefits at all."

Opposition leader Jeremy Corbyn has told Parliament that the Brexit deal on which lawmakers are voting risks jobs, rights, the environment and the health service.

The Labour Party leader told Parliament Saturday that Prime Minister Boris Johnson's new deal is substantially worse than the one it replaces, which was voted down three times.

Corbyn says it removes protection for workers' rights and the environment and replaces them with empty promises. He says it would also reduce Britain's commitment to fighting climate change.

He also warns it would hurt British manufacturing.

He used a rare Saturday session to plead with lawmakers to back the new plan.

He says it would "take back control" of Britain's borders, fishing and trade and preserve the gains of the Good Friday agreement that helped end violence in Northern Ireland.

Johnson faces a close vote on his plan with opposition parties determined to block it.

Prime Minister Boris Johnson's plan to get Parliament to approve his Brexit deal with the European Union has been thrown into doubt.

Lawmakers will first vote on whether to withhold approval until legislation to implement the agreement has been passed. That would bring another law into play that would force Johnson to seek a Brexit delay from the European Union.

House of Commons Speaker John Bercow said would allow a vote on an amendment that essentially puts the vote on the deal off until another day.

Those behind the amendment say it will remove the risk that the U.K. could stumble out of the bloc without a deal on Oct. 31 because the law is not in place.

The vote is due later Saturday.

Prime Minister Boris Johnson's Brexit plan faces what is expected to be an extremely tight vote as Britain's Parliament prepares for its first Saturday session since the 1982 Falklands war.

At stake is a new divorce plan agreed between the British government and the other 27 European Union nations at a summit Thursday.

Johnson hopes for success in getting a fractious Parliament to back the deal after his predecessor, Theresa May, failed three times to get lawmakers behind her plan.

Johnson does not have a parliamentary majority but he is hoping to woo some opposition Labour Party lawmakers to his side.

He said in The Sun newspaper on Saturday that a vote for the plan would bring a "painful chapter in our history" to an end.