Detention of Uighurs must end, UN tells China, amid claims of prison camps 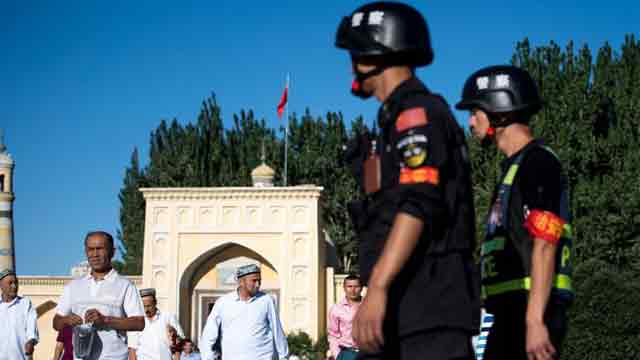 Beijing, Aug 31 (Just News): United Nations human rights experts have called for China to shut down alleged political “re-education camps” for Muslim Uighurs and called for the immediate release of those detained on the “pretext of countering terrorism”.

The UN Committee on the Elimination of Racial Discrimination cited estimates that “from tens of thousands to upwards of a million Uighurs” may be detained in the far western Xinjiang province. Its findings were issued after a two-day review of China’s record, the first since 2009.

China’s foreign ministry has rejected the allegations, saying anti-China forces are behind criticism of policies in Xinjiang.

Independent experts said during the review that the panel had received many credible reports that a million ethnic Uighurs are held in what resembles a “massive internment camp that is shrouded in secrecy”. Panel expert Gay McDougall described it at the time as a “no-rights zone”.

Former detainees who spoke to the Associated Press described the internment camps as facilities policed by armed guards where Muslims were forced to disavow their religious beliefs, criticise themselves and their loved ones and give thanks to the ruling Communist party. Claims of beatings and deaths have made it out despite authorities’ tight control on information from the region.

The detention programme has swept up people, including relatives of American citizens, on ostensible offences ranging from accessing foreign websites to contacting overseas relatives. Other aspects of the security crackdown the AP has detailed include all-encompassing digital surveillance, mass deployment of police and severe regulations against religious customs and dress.

China denies such internment camps exist but says criminals involved in minor offenses are sent to “vocational education and employment training centres”. “The argument that ‘a million Uighurs are detained in re-education centres’ is completely untrue,” Chinese representative Hu Lianhe this month told the UN’s Committee on the Elimination of Racial Discrimination in Geneva.

China has said that Xinjiang faces a serious threat from Islamist militants and separatists who plot attacks and stir up tensions between the mostly Muslim Uighur minority and the ethnic Han Chinese majority.

The UN panel said it was alarmed by “numerous reports of detention of large numbers of ethnic Uighurs and other Muslim minorities held incommunicado and often for long periods, without being charged or tried, under the pretext of countering terrorism and religious extremism”.

It regretted that there was no official data on those detained “for even non-threatening expressions of Muslim ethno-religious culture like daily greetings”.

There were reports that “many Uighurs abroad who left China have allegedly been returned to the country against their will”, it said, calling on China to disclose the current location and status of students and asylum seekers who went back.

The panel also urged China to allow Tibetans access to passports for foreign travel and to promote the use of the Tibetan language in education, the judicial system, and media.

In the US, lawmakers have written to the Trump administration asking for sanctions on Chinese officials allegedly tied to the mass internment programme and “ongoing human rights crisis” in Xinjiang. Muslim ethnic minorities faced torture and “egregious restrictions on religious practice and culture”, said the letter, which was signed by Senator Marco Rubio, Representative Chris Smith and 15 others. The letter singles out Xinjiang’s top official, Chen Quanguo, accused by many of turning the region into a police surveillance state.

Rubio and Smith in April raised the possibility of imposing sanctions on Chinese officials under the 2016 Global Magnitsky Act, asking the US ambassador to Beijing, Terry Branstad, to visit the region and collect information on Xinjiang officials responsible for the mass detention policy.-The Guardian