Prince Harry hopes for calmer future, but not much chance 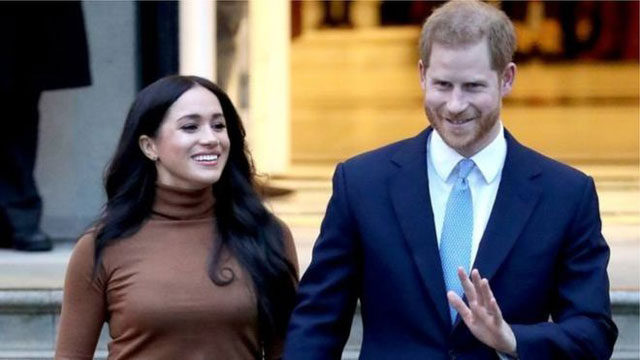 Prince Harry says he's taking a "leap of faith'' as he steps back from royal duties in an attempt to build a more peaceful life — one free of the journalists who have filmed, photographed and written about him since the day he was born.

As Harry reportedly flew out of Britain on Monday to be reunited with his wife Meghan in Canada, many predicted the prince and the former TV star would struggle to escape global fame and its pressures.

"They believe that if they are not representing the monarchy any longer, the tabloid press will eventually go away because it will be so expensive for them — that there won't be the same savage approach. They feel they will be able to control it more from Canada,'' said Pauline Maclaran, a business professor at Royal Holloway University of London and author of "Royal Fever: The British Monarchy in Consumer Culture.''

"I don't think they are being very realistic.''

Harry has long had a frosty relationship with the media, and on Sunday he made it clear that the press was a major reason for the couple's decision to step back from royal life. In a personal speech that referenced his mother, Princess Diana, who died in a car accident in 1997 while being pursued by paparazzi, he said he had "no other option'' but to step away.

Harry has accused the media of directing "a wave of abuse and harassment" at the biracial Meghan, including "racial undertones" in articles. Both he and Meghan filed lawsuits last year against press outlets over alleged intrusion into their private lives. At the time, Harry gave an interview drawing parallels between the treatment of his wife and the media frenzy that contributed to the death of his mother.

"When I lost my mum 23 years ago, you took me under your wing,'' Harry said Sunday at a London dinner for Sentebale, his Africa-based charity supporting youngsters affected by HIV. "You looked out for me for so long, but the media is a powerful force. And my hope is one day our collective support for each other can be more powerful, because this is so much bigger than just us.''

The comments were Harry's first since Saturday night, when his grandmother, Queen Elizabeth II, announced the terms under which the prince and his wife will walk away from most royal duties, give up public funding and try to become financially independent. The couple, who were named the Duke and Duchess of Sussex on their wedding day, are expected to spend most of their time in Canada while maintaining a home in England near Windsor Castle.

Meghan has already returned to Canada, where the couple spent a Christmas break with their 8-month-old son, Archie. Harry continued in his royal role Monday, attending a U.K.-Africa investment summit in London alongside British Prime Minister Boris Johnson.

But he did not appear alongside brother Prince William at an evening reception for African leaders. the BBC and other media outlets reported that he was on a plane bound for the west coast of Canada. They spent the holiday season on Vancouver Island, while Meghan worked for seven years in Toronto where she filmed the TV series "Suits."

Experts on branding and the royals believe the golden couple will, if anything, get even more attention than they do now. Though the couple have expressed disdain for the royal rota — a pool system that gives British journalists access to royal events — the system also served to control media demands. Now, all bets are off.

"The paparazzi will follow them everywhere they go,'' said Jonathan Shalit, a celebrity agent and chairman of London-based InterTalent Rights Group. "A picture of Meghan going to the shops in Vancouver will have value. I certainly think the kind of attention going forward is going to be harder to control.''

And if they want to be financially independent, they won't be able to avoid the media altogether, because clients who pay for their services will want the publicity that comes with a connection to them, Shalit said as he predicted the couple could become a billion-dollar brand. They can expect lucrative deals, such as multimillion-dollar book packages and speaking fees, he said.

Media companies are likely partners. Ted Sarandos, the chief content officer of streaming giant Netflix, told Britain's Press Association he would be interested in working with them, adding: "Who wouldn't be interested?''

The queen's statement on Saturday said the agreement, reached after crisis talks among the top royals and their staff, was a "constructive and supportive way forward."

Under the terms of the deal, Harry and Meghan will no longer receive public funds and they won't use their "royal highness" titles once they stop performing royal duties — although they will formally retain them. They will no longer represent the queen, and Harry must relinquish his honorary military appointments, including his role as Captain General of the Royal Marines.

Harry's speech made it clear that he and Meghan were disappointed that they won't be allowed to carry on with some royal duties as they seek to cut the palace's purse strings.

"Our hope was to continue serving the queen, the Commonwealth and my military associations, but without public funding. Unfortunately, that wasn't possible," he said.

The conditions represent a starker break with the monarchy than Harry and Meghan had envisioned earlier this month when they first announced that they planned to give up full-time royal duties.

"It brings me great sadness that it has come to this,'' Harry said Sunday.

"The decision that I have made for my wife and I to step back is not one I made lightly,'' he said. "It was so many months of talks after so many years of challenges. And I know I haven't always got it right, but as far as this goes, there really was no other option."

Harry praised his grandmother, the queen, and the rest of his family for supporting him and his wife in recent months. The decision to change both jobs and continents is "a leap of faith," he said, adding that he hoped the move would allow him and his family to achieve a "more peaceful life."

"I will always have the utmost respect for my grandmother — my commander in chief — and I'm incredibly grateful to her and the rest of my family for the support they have shown Meghan and I over the last few months," he said.