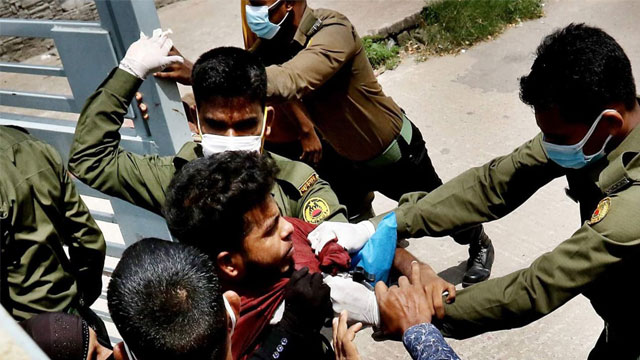 Some Ansar men are seen in this photo taken on the premises of Mugda General Hospital in Dhaka on July 3, 2020, beating up a youth named Shaon who was waiting in queue to have his sample collected for Covid-19 test. The Ansar men later also assaulted a photojournalist of a Bangla daily. Photo: Anisur Rahman

Ansar members at Mugda General Hospital allegedly assaulted a photojournalist of a Bangla daily newspaper today when he was taking photos during a clash that broke out between Ansar men and suspected Covid-19 patients at the hospital premises.

Photojournalist Rubel Rashid of daily Desh Rupantor said he was assaulted while taking pictures as the Ansar men were allegedly beating up a youth who was waiting in queue to have his sample collected for Covid-19 test.

The incident took place around 11:30am today, Rubel Rashid confirmed the incident.

The hospital today provided around 40 tickets for swab collection of suspected Covid-19 patients. However, after 34 persons' samples were taken, the Ansar men announced that no more samples will be collected today.

As one youth named Shaon, who was 36th in the queue, protested, the Ansar personnel began beating him up.

Noticing Rubel Rashid taking photos of the incident, the Ansar members physically assaulted him and broke his camera.

"As I proceeded to take pictures of the incident, the Ansar men slapped me and broke the filter of my camera lens," he told The Daily Star.

A photojournalist from Bangladesh Protidin tried to intervene as they were dragging Shaon inside the hospital premises. She ducked when they tried to beat her.

On information, police went to the spot around 15-20 minutes later and brought the situation under control.