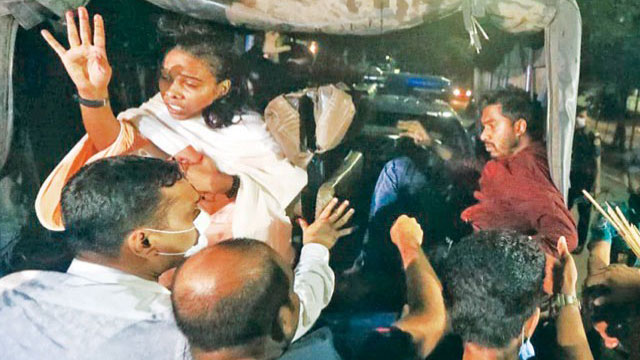 The immediate past Dhaka University Central Students’ Union vice-president, Nurul Haq Nur, and six others were briefly detained on Monday evening from a protest rally at Shahbagh against a rape case filed by a Dhaka University female student.

The immediate past Dhaka University Central Students’ Union vice-president, Nurul Haq Nur, and six others were briefly detained on Monday evening from a protest rally at Shahbagh against a rape case filed by a Dhaka University female student.

Detective Brach joint commissioner Md Mahbub Alam said at about 9:40pm that Nur and the six were released after taking their undertaking.

At about 9:15pm, DMP deputy commissioner (media and public relations) Walid Hossain said that Nur and the six were arrested on charge of attacking policemen during their demonstration in Matsya Bhaban area.

He said that they were taken to the Detective Branch office on the Minto Road following their arrest.

She also accused Nurul Haq Nur and four others of assisting the alleged rapist in ‘hiding’ his ‘crime’ and of ‘threatening’ her.

The 22-year-old student alleged that she was ‘cheated’ over ‘false’ promise of marriage and was ‘raped’ by Mamun on January 3, 2020.

Lalbagh police station officer-in-charge KM Ashraf Uddin said that they were verifying the role of Nur and others in the alleged incidents.

The student, who also claimed to be an activist of the quota movement, in her complaint said that she met Mamun on July 29, 2018 and they were involved in a relationship.

On January 3, Mamun asked her to visit his house at Lalbagh and ‘raped’ her there with a ‘false promise’ of marriage, she alleged.

She fell sick the next day and got admitted to Dhaka Medical College Hospital with the help of Shohag.

She alleged that following the incident, Mamun ‘agreed’ to marry her but later denied the relationship.

On July 24, she called Nur to fix the problem and Nur promised to solve it, she alleged.

But, without fixing the problem, Nur threatened her saying that rumours would be spread against her.

Nur said that more than two months back the student called him and ‘sought’ cooperation in repairing her relationship with Mamun.

He said that she asked him to remove Mamun and Shohag from Sadharan Chhatra Odhikar Sangrakshan Parishad.

He told her that since she wanted him to help repair the relationship, he could do so but could not fire any of his colleagues without any ‘reasonable’ reason, Nur added.

He said that she did not call him again but she filed the case.