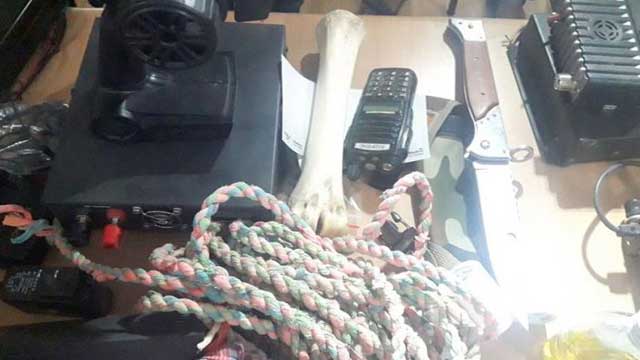 A Rab mobile court, led by Executive Magistrate Sarwar Alam, raided the nine-storey building of Haji Selim on Devdas Lane of Swarighat in Old Dhaka around noon. The drive continued till 6:45pm.

Irfan and his bodyguard Zahid were detained. Rab recovered two firearms, 38 walkie-talkies, several cans of beer and liquor from the house.

The duo was sentenced to one year in jail for illegal possession of walkie-talkie and drinking liquor. They were sent to Keranigonj Dhaka central jail.

Lt Col Ashique Billah of Rab said they were given six months’ jail each for drinking wine and another six months for the illegal possession of walkie-talkies.

Two separate cases will be filed at the local police station -- one under the Arms Act and another under Narcotics Control Act -- against the duo, he said.

Talking to reporters, Executive Magistrate Alam said based on information provided by Irfan, Rab raided the rooftop of 16-storey Ashik Tower in Chawkbazar.

Hockey sticks, handcuffs, knives, and some other tools generally used for torturing people, were recovered from a big room on the rooftop, Sarwar Alam said.

“The room was reportedly used as a ‘torture cell’ by Irfan,” he said.

According to the case statement, a private car hit Wasif's motorcycle near Labaid Hospital at Dhanmondi around 7:45pm when he and his wife were returning to their Mohammadpur residence from Nilkhet.

Later, some people got out of the car and physically assaulted the navy officer and verbally abused his wife.

Md Ikram Ali Mia, officer-in-charge of the police station, said the car’s driver Mizanur was detained from the spot and shown arrested in the case.

Home Minister Asaduzzaman Khan told reporters that the government would not let anyone go scot-free irrespective of who they are.

“If anyone commits a crime, he/she will be brought under law, no matter who the person is,” he told reporters at his Dhanmondi residence when asked about the attack on Lt Wasif.