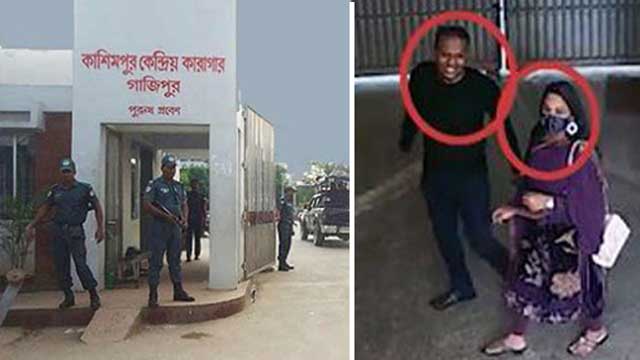 Inquiries have been initiated after Hallmark Group General Manager Tushar Ahmed, an inmate in Gazipur’s Kashimpur jail, spent time with a woman in an unauthorized meeting allegedly facilitated by prison officials.

Three prison officials have also been withdrawn over the incident.

The incident reportedly took place on January 6, but it came to light after a TV channel aired the CCTV footage.

Tushar Ahmed was seen roaming near the offices of the prison area just before a woman was seen entering the premises.

Security footage has also shown Deputy Jailor Saklain receiving the woman at the entrance and escorting her to his office.

At one point, the prison official left his office only to return with Tushar around 10 minutes later.

Later, Saklain left his office leaving Tushar and the woman there for about 45 minutes.

Gazipur Deputy Commissioner MM Tariqul Islam said that an inquiry headed by an additional deputy commissioner was opened over the matter on January 12.

“Initial findings suggest the incident is true. The investigation is in progress,” he said.

Meanwhile, the Department of Prisons have opened a separate probe.

Additional Inspector General (Prisons) Md Abrar Hossain told the media on Friday that a three-member probe committee led by him has been given seven working days to file their findings.