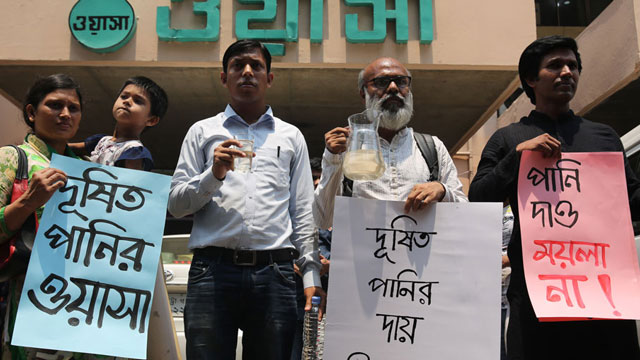 Protestors have failed have Wasa Managing Director (MD) Taskim consume Wasa's "undrinkable" water as he was not present at his office in Dhaka’s Karwanbazar.

Police first barred protestors from entering the Wasa building, but let them in to talk to officials around 1pm on Tuesday.

Mizanur Rahman, a resident from Dhaka's Jurain area—along with his family and friends—gathered in front of the Wasa building around 11am in the hopes of meeting the Wasa MD around 12pm.

After not being allowed to enter, they sat on the front stairs of the building.

They brought water, supplied by Wasa he claimed, for Wasa MD Taskim to drink, because he recently claimed that their water is "100% drinkable."

“Water we see in the drain is the same as what we have in our water tanks,” Mizanur said.

“He [Taskim] said Wasa water is drinkable. That is why we have brought it for him to drink,” he added.

Mizanur claimed people from the Jurain area collected the signatures of residents and submitted it to Wasa.

Wasa started supplying water to the Jurain area around 40 years ago, Mizanur said.

“However, for the last few years it is totally unusable,” he claimed.

He upheld some of the local demands that: Taskim step down from his position as MD and seek forgiveness; bills paid by consumers for using "waste water" be returned; and that no bills be paid until customers have drinkable water.

He then said he was sending Wasa officials to the Jurain area immediately.

Reasons behind the alleged contaminated water may be the old supply line.

“Obsolete lines may be the cause. We are changing them one by one,” said Shahid.