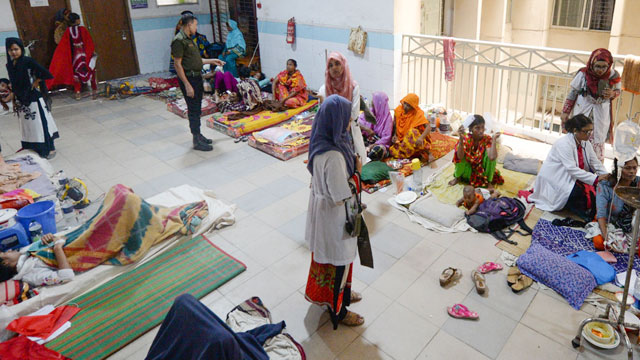 Two people, including an eight-month-old baby, died of dengue at Khulna Medical College Hospital (KMCH) while 653 new dengue patients were admitted to different hospitals across the country in 24 hours till Monday morning.

The deceased were identified as Rafiz, son of Quamruzzaman of Manirampu upazila in Jashore, and Khabir Uddin, 50, son of Abdul Khaleque of the same upazila.

Dr Partha Pratim Debnath of KMCH said the baby boy was admitted to the hospital on Sunday afternoon with dengue shock syndrome and later shifted to the Intensive Care Unit as his condition deteriorated.

He died in the early hours of Monday, he said.

Of the new patients, 193 were hospitalised in Dhaka and 460 in other parts of the country, the Directorate General of Health Services (DGHS) said.

About 2,507 patients, including 983 in the capital, are currently being treated at hospitals across the country.

Since the beginning of this year, 81,839 people were hospitalised with dengue, most of them in Dhaka, until Monday morning. Of them, 79,129 made full recovery, according to the government.

Since January, the Institute of Epidemiology, Disease Control and Research (IEDCR) received information about 203 dengue-related deaths. It has so far reviewed 116 cases and confirmed 68 dengue deaths.