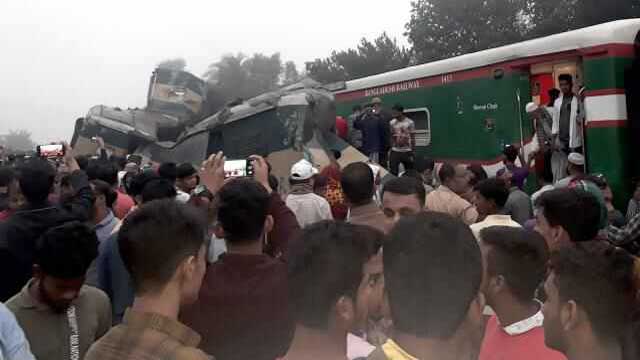 At least 15 passengers were killed and over 100 others injured in a fatal collision of two trains on Dhaka-Chattogram route in Mandbagh area here early Tuesday.

The deadly collision between Dhaka-bound Turnanishita from Chattogram and Chattogram-bound Udayan Express from Sylhet took place around 3am, said Deputy Commissioner Hayat-Ud-Dowllah Khan, who visited the spot right after the crash.

“So far, 15 people have died in the deadly accident, but the figure may go up further,” the DC added.

Several units of Fire Service from Brahmanbaria Sadar, Akhaura and Kosba rushed to the spot and carried out the rescue operation.

The injured were taken to hospitals in Kosba, Akhaura and Zila Sadar Hospital.