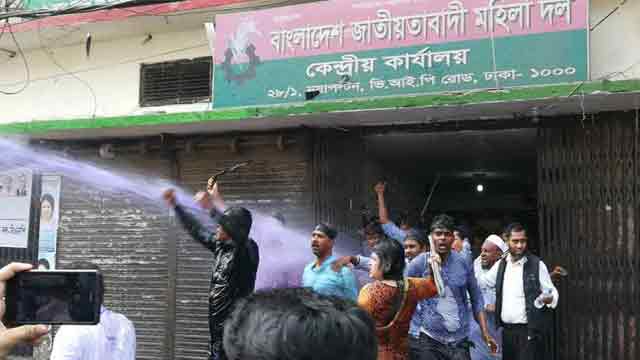 Dhaka, Feb 24 (Just News): Police on Saturday foiled the Bangladesh Nationalist Party’s (BNP) black flag showing programme in front of its Naya Paltan central office protesting at the denial of permission to hold a rally in the city.

When the BNP leaders and activists tried to gather in front of their central office at 9:30am police chased them and arrested 20 of them.

Earlier on 22 February, the BNP announced the programme protesting at the denial of permission for its planned rally on Thursday demanding the release of party chairperson Khaleda Zia from jail.

“We’d sought police permission to organise a public rally on 22 February either at Suhrawardy Udyan or in front of our Naya Paltan office. We’d also taken all necessary preparations. But the police didn’t give us permission,” said BNP senior joint secretary general Ruhul Kabir Rizvi at a press conference at the party’s central office on Wednesday.

On 8 February, BNP chairperson Begum Khaleda Zia was sent to jail after a special court sentenced her to five years’ rigorous imprisonment in the Zia Orphanage Trust case.