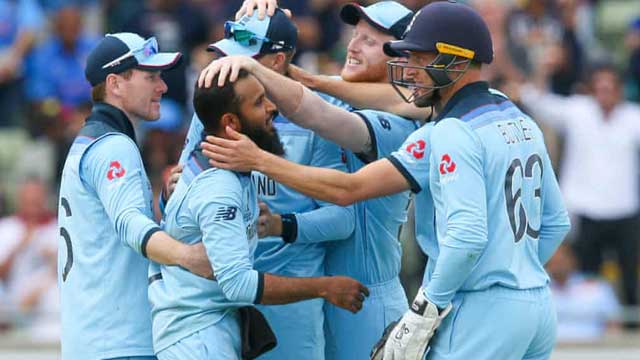 Chris Woakes and Adil Rashid each took three wickets as England seized control of their World Cup semi-final against Australia at Edgbaston on Thursday, bowling out the defending champions for 223.

Woakes struck twice early on as Australia slumped to 14-3 after winning the toss in Birmingham but Steve Smith led the recovery for Australia with 85 and Alex Carey made 46.

The hope for Australia is that an attack led by left-arm fast bowler Mitchell Starc, the tournament's leading wicket-taker with 26 scalps, can defend a seemingly low total.

Australia are bidding for a sixth World Cup title, having won four of the past five editions.

Australia captain Finch, who won the toss, fell for a golden duck when he was lbw to fast bowler Jofra Archer's opening delivery at the start of the second over.

Left-hander Warner, who has scored more than 600 runs at the 2019 World Cup, then drove Woakes back over his head for four.

But next ball Woakes, on his Warwickshire home ground, produced a rising delivery that Warner, on nine, could only fend to Jonny Bairstow at first slip to leave Australia 10-2 inside three overs.

Warner, who walked out to boos because of his role in a ball-tampering scandal in South Africa last year, returned to even louder jeers mixed in with those for incoming batsman Steve Smith, who was also given a 12-month ban for his part in the incident.

Peter Handscomb (4) was the next to follow as Woakes burst through his defences and cleaned him up.

Eion Morgan can lead England to their first World Cup final since 1992 if they beat the holders at Edgbaston.

Advancing to Sunday's title match at Lord's would be the culmination of four years' hard work for Morgan and his squad after their dismal performance at the 2015 edition.

On the eve of the crunch clash, Morgan issued a passionate plea for his players to take pride in their achievements so far and to relish their moment in the spotlight rather than be weighed down by pressure.

"Sometimes I'm guilty of it, you can lose sight of the position you're in and the fact you're living your dream," Morgan told reporters on Wednesday.

"I think it's possible to play with a smile on your face tomorrow."