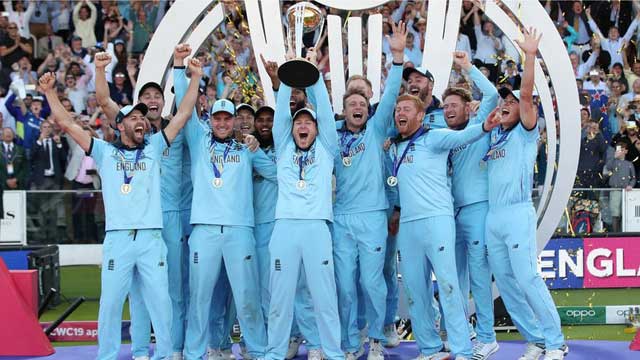 England have won the Cricket World Cup for the first time after a thrilling victory over New Zealand at Lord’s in a match that had to be settled by a super over.

After winning the toss and opting to bat Kane Williamson’s New Zealand side yet England a victory total of 242, Henry Nicholls top scoring with 55 and Tom Latham adding a useful 47 lower down the order. Chris Woakes and Liam Plunkett took three wickets apiece.

England looked deep in trouble when they were reduced to 86 for four by some expert bowling but a superb century partnership from Ben Stokes and Jos Buttler wrestled back the initiative, and Stokes’s dramatic, unbeaten 84 forced the super over.

Stokes and Buttler came out to bat for England. Trent Boult was the bowler for New Zealand and his line was impeccable but a four from Buttler off the final ball meant England posted a total of 15.

Joffra Archer took the ball for England but a wide off the first ball set the tone. Jimmy Neesham hit a six and it came down to Martin Guptill needing two runs off the final ball to win the World Cup. He was run out by Buttler and England took the glory.

Williamson’s 30 off 53 balls reflected New Zealand’s watchful approach on another tricky pitch, Nicholls overturning an lbw decision on nought to top-score with 55 off 77 deliveries. Plunkett’s key breakthroughs, the all-important scalp of Williamson among them, took the headlines though Woakes was the metronome of the England attack, especially early on. Mark Wood and Archer turned up the heat - although England gave away 17 wides in 30 extras. Wood equalled the fastest delivery in the tournament at 95.7 miles per hour while he chipped in with the wicket of Ross Taylor – earning an lbw decision that would have been overturned had New Zealand not earlier burned their review.

New Zealand eventually posted a total of 241 for eight off their 50 overs and there was drama with the first ball of England’s reply, umpire Marais Erasmus unmoved after Jason Roy was caught flush on the pads by an inswinger from Boult. New Zealand immediately reviewed and Roy was only reprieved by umpire’s call on leg stump. Roy was loose on the drive, playing and missing off Matt Henry, who eventually had his man when another punch from the batsman took the outside edge and was taken low by wicketkeeper Latham.

Joe Root was unable to make it out of double figures and Jonny Bairstow departed for 36, as England slipped to 71 for three. The hosts were in major strife when Eoin Morgan carved Neesham’s first ball in the air to deep point, where Lockie Ferguson took a fantastic catch diving forward.

Buttler had a couple of moments of fortune, initially as the penultimate delivery of De Grandhomme narrowly missed bat and stumps. Off the very next ball, England’s wicketkeeper sliced into the air but bounced short of third man as Colin de Grandhomme finished with astonishing figures of 10-2-25-1.

When Boult offered some width Buttler could not resist, cutting uppishly beyond the diving Martin Guptill. However, the outstretched right hand of New Zealand’s gun fielder at backward point was unable to pouch the chance.

The partnership had passed 50 when Buttler was struck on the front pad by Henry, leading to a New Zealand review, only to go to waste as technology showed the ball would have bypassed leg stump. However, the asking rate was up to seven an over at the end of the 36th.

The tension was palpable as the overs ticked away, Buttler diffusing some of it with an outrageous trademark scoop after stepping across his stumps off Henry. The equation came down to 65 runs from the final eight overs.

Buttler was the first to his 50 off 53 balls, thumping Boult over the cover fielder for four and taking his and Stokes’ partnership into three figures, the first century partnership of the match. Lord’s was rocking, the atmosphere fevered, as Stokes followed Buttler to a half-century three balls later.

Buttler hammered a Ferguson full toss over cover for four but was fortunate a slice off the next ball went fine, stopped at the third man boundary by Boult, who saved two. However, Buttler was on his way back to the pavilion after an excellent 59 from 60 balls when he miscued a slower ball from Ferguson to substitute fielder Tim Southee, running in from cover point to take a fine catch.

Woakes, Plunkett and Archer came and went but Stokes remained as England needed 15 to win the World Cup off off the final over.

Stokes was unable to clear the ring from the first two balls, Boult nailing his lengths, and the all-rounder refused the single. The Durham man got down on one knee and slog swept the next ball for a maximum before a strange turn of events led to England needing three from two balls.

Stokes failed to connect cleanly with a full toss but, coming back for a second, he dived into the crease, the ball from Guptill’s throw bouncing off his bat and racing away for four. Six runs – the two England ran and the four overthrows – were therefore added to England’s total as Stokes held his hands up in apology. A single off the final ball forced the super over and the rest was history.-The Guardian