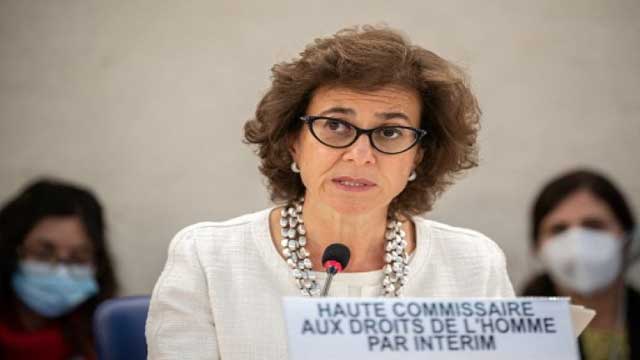 United Nations Acting High Commissioner for Human Rights Nada al-Nashif delivers a speech during the opening day of the 51st session of the UN Human Rights Council at the UN offices in Geneva on September 12, 2022. – AFP photo.

Nada Al-Nashif, the United Nations acting high commissioner for human rights, on Monday urged Bangladesh authorities to ensure freedom of expression and peaceful assembly and for security forces to refrain from using excessive force against protests.

‘In the polarising environment ahead of the next elections, it will be vital for the [Bangladesh] government to ensure freedom of expression and peaceful assembly, and for security forces to refrain from using excessive force against protests. Human rights defenders, lawyers, journalists, and victims’ families should not face reprisals or sanctions for their advocacy work,’ Nada Al- Nashif told the 51st session of the Human Rights Council in Geneva.

Nada Al- Nashif on Monday informed the session about the recent visit of immediate past human rights high commissioner Michelle Bachelet to Bangladesh and her concerns about the country’s human rights situation and suggestions, including setting up an independent body against those abuses.

Bachelet visited Bangladesh between August 14 and 17, when she discussed human rights issues with government ministers and met Rohingya refugees in Cox’s Bazar.

Nada Al- Nashif also welcomed Under-Secretary-General Volker Türk, whose appointment as the next United Nations High Commissioner for Human Rights was approved by the United Nations General Assembly on September 8.

The 51st regular session of the Human Rights Council begins on Monday and will end on October 7.