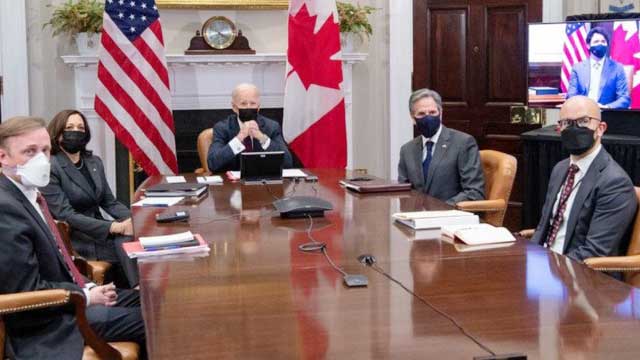 US President Joe Biden has spoken to Canadian Prime Minister Justin Trudeau in his first bilateral meeting with a foreign leader since taking office.

They vowed to align climate goals to achieve net zero emissions by 2050.

And Mr Biden said the US would help Canada secure the release of two Canadians held by Beijing, saying they were not bartering chips.

Canada is often the destination chosen for a US president's first foreign trip, but Covid-19 scuppered Mr Biden's plans. Instead, the meeting was held remotely.

Mr Biden, a Democrat, is hoping to hit the reset button with Mr Trudeau, a Liberal, whose relationship with the former Republican US President Trump was often considered rocky.

Mr Trudeau also pledged to work with the US to "get through Covid but also to make sure we're pulling our weight around the world".

The leaders did not take questions from journalists, which is unusual in Washington for a bilateral event such as this.

What was said on climate change?

Mr Trudeau in his opening remarks criticised the Trump administration, and thanked Mr Biden for "stepping up".

The prime minister added: "As we are preparing the joint rollout and communique... it's nice when the Americans aren't pulling out all references to climate change."

But the two leaders did not publicly comment on the White House's decision to cancel the Keystone XL pipeline project, which would have boosted oil supplies from Canada's Alberta province to US refineries.

In a phone call two days after Mr Biden took office - Mr Biden's first official call as president - Mr Trudeau conveyed his "disappointment" at the pipeline decision. A US official later said the closure would "not be reconsidered".

Development of the pipeline was originally blocked by the Obama administration in 2015, but former President Donald Trump overturned that order and allowed it go ahead.

The project has been bitterly opposed by environmentalists and Native American groups for more than a decade. They see it as highly polluting and potentially a major setback to efforts to move away from fossil fuels.

Industry groups say it would create thousands of jobs and increase US energy security.

Earlier on Tuesday, US Press Secretary Jen Psaki told reporters Mr Biden had made clear to Mr Trudeau that the project was "not in the interests of the United States and that we want to try to address our climate crisis, while also creating good paying union jobs".

The US and Canada share one of the world's largest trade partnerships, and exchange close to $2bn (C$2.5bn/£1.4bn) in goods and services daily.-BBC