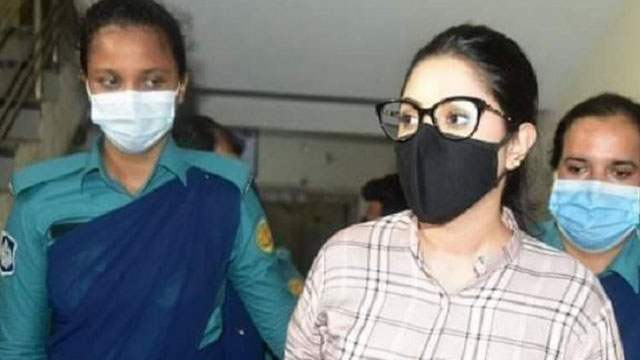 On Sunday, the actor appeared before the court for a hearing and moved a petition as her bail expired.

The prosecution argued against it but Metropolitan Magistrate Satyabrata Sikder granted the actor bail.

The court also accepted a charge-sheet against Pori Moni and others accused in the case and transferred the case documents to Dhaka Metropolitan Sessions Judge court for trial.

Opposing Porimoni's bail, Public Prosecutor Abdullah Abu told the court that Pori Moni dishonoured the court as she did not appear before the court on time.

He said usually the accused appear before the court at 10 in the morning however the actor arrived at 1.00 pm.

In reply, Pori Moni’s lawyer apologised and said this will not happen in future.

Meanwhile, the actor fell sick following the court hearing and was seen lying in the courtroom. Later, she left the court premises in her car.

Rapid Action Battalion (RAB) detained Pori Moni on August 4 from her Banani flat in Dhaka and seized huge amounts of foreign liquors and different drugs from there.

RAB brought drugs-related charges against Pori Moni and her aide Dipu in the case filed with Banani police station on August 6.

On August 31, Dhaka Metropolitan Session Judge KM Emrul Kayesh granted Porimoni’s bail in the case. She was released from jail on September 1 after nearly a month of her arrest.