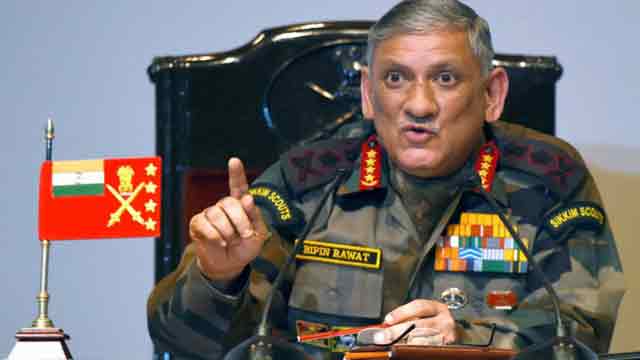 New Delhi, Feb 22 (Just News): A “planned” influx of people from Bangladesh into India’s north-eastern region is underway as part of a proxy war being waged by Pakistan, with support from China, to keep the area disturbed, said Indian Army chief General Bipin Rawat on Wednesday.

The Army chief took recourse to the “faster” growth of the Badruddin Ajmal-led AIUDF (All India United Democratic Front) in Assam, as compared to the BJP in the country in the 1980s, to buttress his point on the increase in Muslim population in several districts of the state in the backdrop of the National Register of Citizens being updated and finalised to detect illegal immigrants there.

“There is a party called AIUDF. If you look at it, they have grown in a faster time-frame than the BJP grew over the years,” said Gen Rawat, while referring to the BJP winning only 2 seats in 1984. “The AIDUF is moving at a faster pace in Assam,” he added, during a conference on bridging gaps and securing borders in the Northeast region.

The Army chief then went on to stress that the “proxy game” was being executed by “our western neighbour (Pakistan)”, with support from across the “northern border (China)”, to keep the area disturbed. “They will always try and ensure that this area is taken over, playing the proxy dimension of warfare. The solution lies in identifying the problem and holistically looking at it,” he said.

Pointing out that it was no longer possible to change the population dynamics of Assam, with Muslim majority increasing from five districts earlier to eight to nine districts now, the Army chief said efforts should be made to “amalgamate” the people living in the region. The Union government is taking several measures to ensure development of the entire region, which will help in sorting out many problems. Migration, of course, is also taking place from Bangladesh because of shrinking land space in the country due to several factors, including floods, said Gen Rawat.-Times of India