Women, children are being slaughtered while world watches 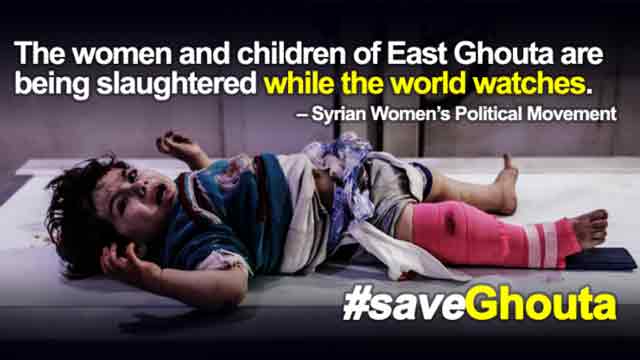 Eastern Ghouta, Feb 23 (Just News): In the wake of a devastating military escalation in Syria’s Eastern Ghouta, the Syrian Women’s Political Movement has written a letter to the UN Security Council calling on the international community to take immediate action to protect civilians and break the siege. Attacks in the besieged area have killed more than 250 civilians in recent weeks, and without access to adequate medical care, the death toll is sure to rise.

“This week the civilians of Eastern Ghouta confronted a devastating escalation of regime air raids and ground artillery, with regime aircraft targeting medical facilities, schools, marketplaces, and homes”, the SWPM writes. “In the past three days alone, these attacks have killed at least 250 civilians and wounded thousands more. Since Sunday 18 February, at least 42 women and 60 children have been killed, with dozens more dying every day. This mass massacre aims to exterminate Eastern Ghouta’s civilian population and cleanse the area of anyone who demands freedom and dignity.”

“The women and children of Eastern Ghouta are being slaughtered while the world watches. The Syrian regime, aided and abetted by Russia and Iran, is mercilessly targeting civilians in violation of international law and the will of the Security Council, including UN Security Council resolutions 2118 (2013) and 2254 (2015) and the Geneva Communiqué. Yet to date, Assad has suffered no meaningful consequences for his war crimes and so his atrocities grow ever more horrific.”

On behalf of the women trapped inside Eastern Ghouta, the Syrian Women’s Political Movement is calling on the international community to:

(i) Break the siege of East Ghouta through all means possible, including urgently delivering humanitarian airdrops to the besieged population;

(ii) Protect civilians from indiscriminate attacks, including taking action to stop the bombs that are raining on women and children.

(iii) Support an immediate ceasefire that includes credible consequences if and when violence resumes and any parties besiege civilians or bomb civilian life.