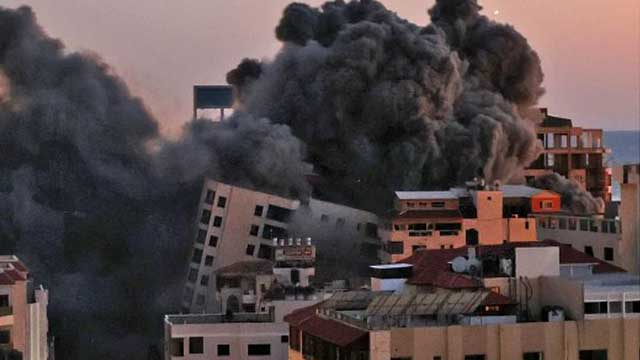 Israeli air strikes hammered the Gaza Strip pre-dawn Monday, after a week of violence between the Jewish state and Hamas left more than 200 people dead as international calls for de-escalation went unheeded.

Overnight Sunday to Monday, Israel launched dozens of strikes in the space of a few minutes across the crowded coastal Palestinian enclave controlled by Hamas, according to AFP journalists at the scene.

West Gaza resident Mad Abed Rabbo, 39, expressed "horror and fear" at the intensity of the onslaught.

"There have never been strikes of this magnitude," he said.

In a statement just before 2:00 am (2300 GMT Sunday), the Israeli army said its fighter jets were "striking terror targets in the Gaza Strip".

The renewed strikes come a day after 42 Palestinians in Gaza -- including at least eight children and two doctors, according to the health ministry -- were killed in the worst daily death toll in the enclave since the bombardments began.

In total, 197 Palestinians have been killed in Gaza, including at least 58 children, and more than 1,200 wounded since Israel launched its air campaign against Hamas on 10 May after the group fired rockets. The heaviest exchange of fire in years was sparked by unrest in Jerusalem.

In Israel, 10 people, including one child, have been killed and 282 wounded by rocket fire launched by armed groups in Gaza.-AFP