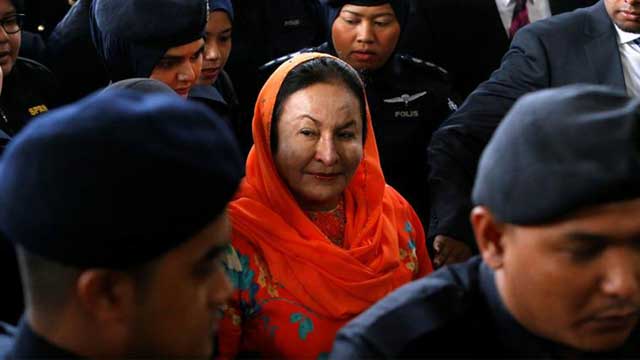 Rosmah Mansor smiled and waved at reporters as she was escorted into court but said little on Thursday.

She was arrested on Wednesday by the Malaysian Anti-Corruption Commission and spent the night in detention. She pleaded not guilty to all charges.

Lead prosecutor Gopal Sri Ram told the court Rosmah "had approached a witness with a request to give a statement in her favour".

Prosecutors sought $2.4m in ball and seized her passport, asking the court to bar her from contacting any witnesses.

"There is a real danger of witnesses being tampered with," Gopal told the court.

The money-laundering charges carry a penalty of up to 15 years in jail and a fine of not less than five times the value of the proceeds of any illegal transfers, or $1.2m, whichever is higher.
'Spending lavishly'

"I think these charges are highly significant," said James Chin from the University of Tasmania's Asia Institute. "This is the first time the wife of prime minister of Malaysia has been charged with corruption."

Chin said the charges against Rosmah, 66, will likely be well received by many in the Southeast Asian nation.

Malaysians have been outraged by the seizure of about $275m worth of cash and goods, including a vast collection of Hermes Birkin and other designer handbags, jewellery and watches from properties linked to Najib and Rosmah.
Saudi gift

Najib - who also making a court appearance on Thursday - faces 32 charges ranging from money laundering to abuse of power and criminal breach of trust in the effort to uncover how billions of dollars missing from 1Malaysia Development Berhad (1MDB).

US investigators say Najib's associates stole and laundered $4.5bn from the fund, with some $700m landing in Najib's bank account and $30m used to buy jewelry for his wife.

He has denied any wrongdoing. Rosmah's arrest came after three rounds of questioning by anti-graft agents over 1MDB.

The then attorney-general cleared Najib in 2016 saying the money in his account was a donation from the Saudi royal family and most of it was returned.-Al Jazeera