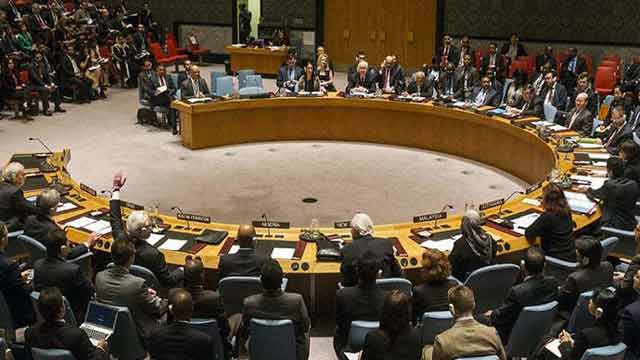 The United Nations Security Council (UNSC) holds a consultative meeting on Friday (today) to discuss the Kashmir issue as Pakistan urges the world body to implement its own resolutions on this 70-year-old dispute.

“We hope the Security Council discussion will be guided by the statement of the UN Secretary General Antonio Guterres who has voiced concern over the situation in occupied Jammu and Kashmir,” said Pakistan’s UN envoy Maleeha Lodhi.

She pointed out that the secretary general had also emphasised the need to resolve this “issue in accordance with applicable Security Council Resolutions and the Charter of the United Nations”. The UNSC resolutions uphold the Kashmiri people’s right to self-determination while the UN charter guarantees their basic human rights.

Friday’s consultative meeting has been called by China on Pakistan’s request to discuss the prevailing situation in IHK. In the closed door meeting, briefings will be given on the situation and consultations will take place to decide how to proceed further. The meeting may decide to issue a statement or can possibly suggest calling an emergency session of the Security Council.

Yet, this marks the first time in over 50 years that the UN Security Council is holding an exclusive meeting on Kashmir, even though consultative.

“The issue before the Security Council is also about the pain, suffering and plight of over 14 million people who have been now locked up in their own homes,” said Ambassador Lodhi while underlining the need for the UNSC to fulfil its obligations.

Focusing on the plight of the Kashmiri people, she added: “Their state has been dismembered, their liberty stolen so that the Indian government can take away their identity.”

Ambassador Lodhi and her team have been tirelessly working since early this month to sensitise the UN members on how India’s decision to revoke Kashmir’s special status threatens South Asia’s peace and stability. But the council’s current composition does not seem to favour Pakistan.

Only one of the five permanent members, China, openly favours Pakistan. The remaining four — Britain, France, Russia and the United States — want India and Pakistan to address the Kashmir dispute in a bilateral set-up. While India too favours this position, it refuses to hold any talk on Kashmir, as it calls the Kashmir issue an internal matter.

The 10 non-permanent members — who are elected for a two-year term by the UN General Assembly — are Belgium, Côte d’Ivoire, Dominican Republic, Equatorial Guinea, Germany, Indonesia, Kuwait, Peru, Poland and South Africa. While two of them — Indonesia and Kuwait — have sympathised with Pakistan in the past, it will be difficult to persuade others to back the Chinese request.

It was Poland’s Joanna Wronecka, the current president of the UN Security Council, who disclosed on Wednesday that the council would meet on Aug 16, to discuss the situation in Jammu and Kashmir, on China’s request.

Earlier this week, Foreign Minister Shah Mahmood Qureshi wrote a letter to Ms Wronecka, urging the council to urgently convene a session on India’s decision to declare Jammu and Kashmir a union territory by revoking of Article 370 of its own constitution.

China had requested a closed meeting on Jammu and Kashmir, citing the letter sent by Mr Qureshi. Upon his return to Pakistan from a visit to China, Mr Qureshi had said that Chinese Foreign Minister Wang Yi had assured him of full support at the UNSC.

Ambassador Lodhi, however, said in an interview to Turkey’s TRTchannel that Pakistan had been “getting significant traction from the members of the council.”

When her attention was drawn by BBC News to statements made by some UNSC members on Pakistan’s move, Ambassador Lodhi said, “I am not going to pre-judge what the council members are going to say, but I think they will be guided by the statement of the UN secretary general.

“I think at this point in time the very affirmation or re-affirmation of the council’s resolutions itself is going to nullify the Indian claim that this is an internal matter.”