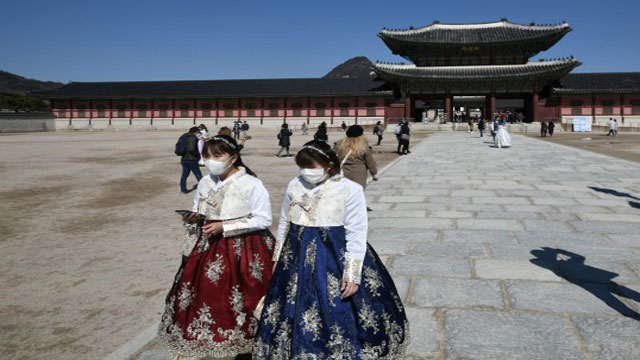 South Korea reported the fourth death from the new coronavirus and 123 new cases on Sunday morning, bringing the total number of infections to 556.

The fourth victim of COVID-19 was a 57-year-old man who had been hospitalized at Daenam Hospital in Cheongdo, North Gyeongsang Province. The third casualty from the virus was reported Saturday -- a 41-year-old man who tested positive in a posthumous examination.

Virus cases have skyrocketed in South Korea in the past few days, seeing a tenfold increase from 51 on Wednesday to 556 as of 9am Sunday, according to the Korea Centers for Disease Control and Prevention.

Out of the 556 infections, 306 cases were traced to the Daegu branch of the Shincheonji Church of Jesus, the Temple of the Tabernacle of the Testimony, and 111 cases were linked to the Daenam hospital in Cheongdo.

Health authorities are checking the health status of 9,336 members of the religious group, with the members being placed in self-isolation. More than 1,200 people reportedly said they had suspicious symptoms.

Though most of those infected with the virus, or 465 people, were from Daegu and North Gyeongsang Province, cases of the coronavirus have been confirmed in nearly every part of the country over the weekend, including Busan, Ulsan, Jeju Island and Gangwon Province.

Daegu and Cheongdo were designated as "special care zones" Friday.

Some 6,039 people are awaiting test results and, 18 people have been released after making full recoveries.

In a rare public message on Saturday night, Prime Minister Chung Sye-kyun apologized for the recent spike in infections and reassured people that the virus could be contained if the public cooperates with the government's instructions.

Chung asked people to refrain from attending mass gatherings, including rallies and religious services, to prevent the spread of the virus.

Despite the surge in the number of infections here, the government said it would not raise the four-tier virus alert level from the current "orange level" to the most serious "red level," as the virus is spreading only in restricted areas.