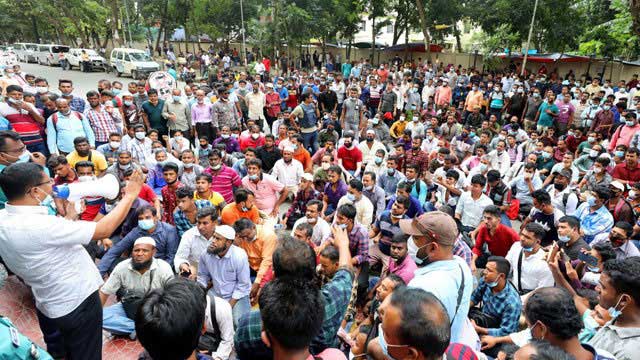 Hundreds of Bangladeshi migrant workers continued to hold a demonstration at Sonargaon hotel intersection in the capital for the second consecutive days on Wednesday demanding air tickets for Saudi Arabia so that they could join their workplaces before their visas expired.

The migrant workers gathered in front of the Saudi Arabian Airlines office in the morning to secure tickets.

The airlines issued a notice on Tuesday saying that they suspended the issuance of tickets, which led to the protest.

Hatirjheel police station officer-in-charge Abdur Rashid said about 1:30pm that they were struggling to control the demonstrators.

Ramna police station officer-in-charge Monirul Islam told New Age that some 400 expatriates moved towards the Ministry of Labour and Employment to hold demonstrations but no untoward incident happened.

‘So far it remained peaceful,’ he said.

Amid the protest, the Civil Aviation Authority of Bangladesh on Tuesday decided to allow more flights of Saudi Arabian Airlines to operate so that Bangladeshi expatriates can return to their workplaces.

Meanwhile, foreign secretary Masud Bin Momen told New Age that a virtual meeting held with the Saudi Arabian authorities and they requested them for visa extensions of Bangladeshi migrant workers.

Foreign ministry officials said that they requested the Saudi Arabian authorities for a three-month extension for the Bangladeshi workers now stuck in Bangladesh due to the COVID-19 crisis.

Many migrant workers complained that they were earlier assured of reissuance of ticket.

Some migrant workers complained of ticket black marketing by the Saudi Arabian Airlines officials and staff.

Thousands of Saudi migrant workers are facing uncertainty because of non-issuance of air tickets, said protestors.

Saudi Arabia is home to more than 22 lakh Bangladeshis most of whom are involved in low-paid work.