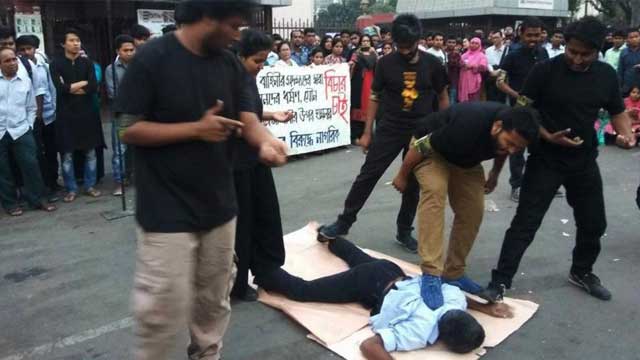 Dhaka, Feb 22 (Just News): The Supreme Court today asked the High Court to hear and settle off the rule by six weeks regarding the confinement of two Marma sisters -- one of whom was allegedly raped and another assaulted by security forces last month.

The Marma sisters - aged 18 and 13- were admitted to the Rangamati Sadar Hospital on January 22 after one was allegedly raped and the other sexually assaulted in their village Bilaichari.

Following a writ petition, the High Court bench led by Justice Naima Haider on February 13 ordered the government and Rangamati Sadar Hospital to hand over the girls to their father.

The High Court also issued a rule asking the authorities to explain why the confinement of the girls should not be declared illegal.

On February 15, the two Marma sisters were handed over to their parents in presence of police.

The same day Sultana Kamal filed a petition with the Supreme Court seeking stay on the High Court order.

In the petition, she claimed that the girls wanted to go under the custody of Chakma Circle Chief Raja Debashish Roy, who would ensure their security.

The elder sister has recently sent a letter to the civil surgeon of Rangamati to this end and a writ petition over this issue has been pending with the High Court, Sultana said in the petition.

Today, the barrister Rokanuddin Mahmud, the lawyer for the writ petitioner told the apex court that the two sisters are now under the custody of their parents.