Media shouldn't publicise nuisance, this should be boycotted: Momen 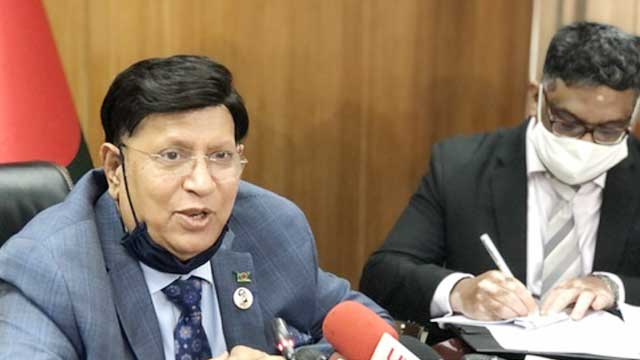 Foreign Minister Dr AK Abdul Momen on Monday suggested the media boycott and stop giving publicity to statements from foreign missions expressing concern over Bangladesh’s internal issues saying Bangladesh never expresses concerns over any matter in the US or elsewhere.

“This should be boycotted. You (media) should stop giving publicity of this sort of nuisance,” he told reporters at his office at the Ministry of Foreign Affairs.

Responding to a question, Dr Momen said the American media will never entertain such remarks if the Bangladesh Ambassador there expresses concern over killing in schools, malls or restaurants.

The Foreign Minister said they do not have any objection if people of this country express concern over anybody's death.

Thirteen Ambassadors and High Commissioners stationed in Dhaka on Friday urged the government of Bangladesh to conduct a "swift, transparent, and independent inquiry" into the full circumstances of Mushtaq Ahmed’s death.

They represented members of the Organisation for Economic Co-operation and Development, or OECD group of nations, with missions in Dhaka. The diplomats of the (OECD) member countries made the call in a joint statement expressing their “grave concerns” over the death in custody of Mushtaq Ahmed on 25 February 2021. The OECD is a group of 37 rich, or 'First World' nations.

Ahmed had been held in pre-trial detention since 5 May 2020 under the provisions of the Digital Security Act (DSA).

Dr Momen said death in jail is a common phenomenon in every country even in the USA.

But, he said, the strange thing is that when someone dies in jail in Bangladesh, they (foreign envoys) create hype over it and the media in the country give that publicity.

He also reminded the newsmen that if a Bangladeshi envoy expresses concern over custodial death in a foreign country that would not get any coverage in the media of the respective country.

Responding to a question, the Foreign Minister said no official in the USA raised the issue of the Al Jazeera report on Bangladesh saying it was a big drama with so many mismatches.

Terming the Al Jazeera report a ‘mere drama’ the foreign minister said that if the content of the report was true, the government would have definitely investigated it.

Dr Momen said such discussion on Al Jazeera drama is only seen in Bangladesh.

Ambassadors and mission chiefs of the United States, United Kingdom, Canada, Denmark, European Union, France, Germany, Italy, Netherlands, Norway, Spain, Sweden, Switzerland, on February 26 issued a joint statement expressing their grave concern about the death of Mushtaq Ahmed in custody and called for an independent inquiry into the matter.

Ned Price, spokesperson of the US Department of State, expressed his concern in a tweet on Saturday morning.

“We call on the Government of Bangladesh to conduct a transparent investigation,” said the spokesperson.