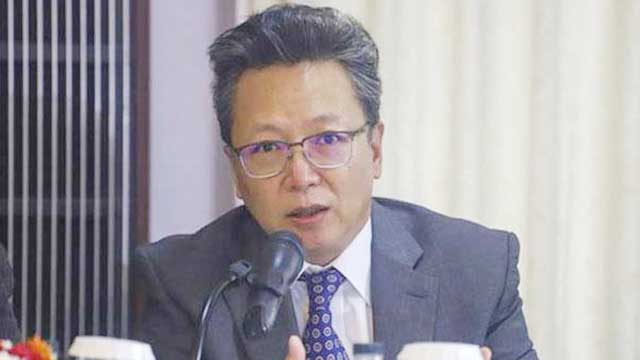 Chinese ambassador in Dhaka Li Jiming on Wednesday presented an explanation to the Bangladesh government about the remarks he made about the possibility of 'substantial damage' to Bangladesh-China relations depending on Bangladesh joining in the Indo-Pacific Strategy promoted by US-led Quad.

Foreign secretary Masud Bin Momen took the explanation from the ambassador at the State Guest House Padma in Dhaka.

The ambassador has presented an explanation about the statement he made to the press, Momen told journalists after the meeting with Li Jiming.

Mentioning about the weakness of the ambassador in English language, the foreign secretary said the ambassador claimed that he expressed his 'personal views' to the press with making 'no suggestions' to the Bangladesh government.

Li made the remarks replying to question, in a vertual meeting with journalists, involving a call on of Chinese defence minister General Wei Fenghe with Bangladesh president Abdul Hamid.

In the meeting with president Hamid on April 27 in Dhaka, General Wei emphasised the need for Bangladesh to take joint efforts against the formation of a military alliance led by the United States on maintaining ‘hegemony’ in South Asia.

‘To jointly maintain regional peace and stability, the two sides [Bangladesh and China] should make joint efforts against powers outside the region setting up military alliance in South Asia and practising hegemonism,’ General Wei said, according to Chinese news agency Xinhua.

Foreign minister AK Abdul Momen on Tuesday said that the remarks of the Chinese ambassador mentioning the likelihood of substantial damage to the bilateral relations between China and Bangladesh were very unfortunate and aggressive.

The US government too 'has taken note' of the statement made by Chinese ambassador to Bangladesh.

A group of four countries — Australia, India, Japan and the US — known as Quad has been propagating for an IPS to allegedly contain the influence of China through its Belt and Road Initiative in the region with a declared focus on advancing common vision of the four countries of a ‘free, open, inclusive, peaceful and secure’ Indo-Pacific region, according to diplomatic sources.

Dignitaries from Australia, Japan and the US often push for Bangladesh’s engagement in the IPS while the Bangladesh government was publicly expressing its unwillingness to engage in rivalries among powerful countries at regional and international levels.