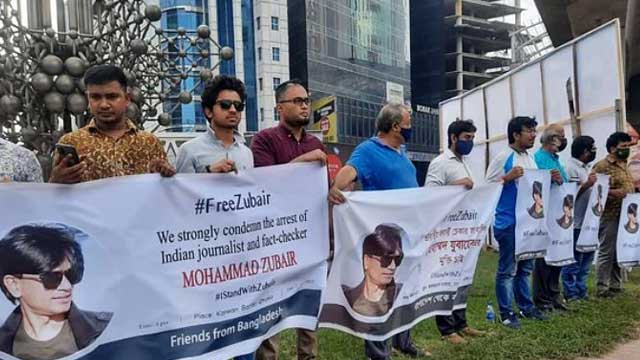 A group of journalists and rights activists formed a human chain in Bangladesh capital Dhaka on Saturday condemning the arrest of Indian fact-checker journalist Mohammad Zubair and demanding his immediate release.

The human chain was formed at the capital’s Karwanbazar under the banner of ‘Friends from Bangladesh’.

He said the arrest of Zubair, the co-founder of checking website Alt, hurt the fact checking reporters and journalists globally.

The rights activist also said that the journalists in Bangladesh were also being prosecuted under the Digital Security Act and urged the government to abolish the DSA.

Journalist Arifuzzaman Tuhin said that the main crime of Zubair was that he had been debunking the propaganda of the Bharatiya Janata Party and Rashtriya Swayamsevak Sangh since the inception of the AltNews in 2017.

Tuhin said that the voice of Zubair had been muzzled.

On June 27, the Delhi Police arrested the AltNews co-founder, days after registering a First Information Report based on a complaint by Bhagwan Sharan, who is the Sitapur unit chief of the Hindu Sher Sen, alleging that Zubair hurt religious sentiments by a tweet in 2018 and legal action should be taken against him.