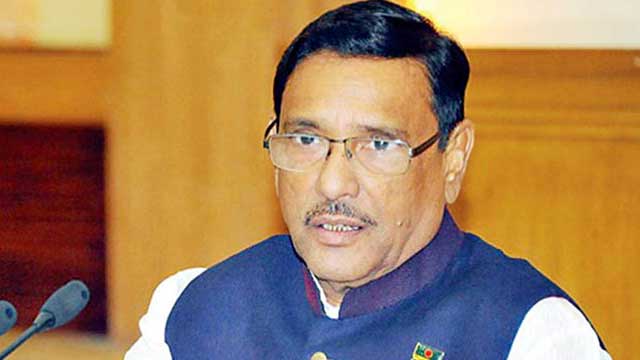 Awami League general secretary Obaidul Quader on Friday accused opposition BNP of hatching conspiracy to take over state power instead of pursuing the politics of people’s welfare and win their votes.

In a statement the AL leader slammed BNP for misleading the friendly foreign countries with misinformation to gain petty political interests.

“BNP is also misleading the people through propaganda,” he said.

Qauder, also the Road Transport and Bridges minister, said BNP has become pariah party after being rejected repeatedly by the people. “The people never responded to the BNP's call. Even then, the BNP leaders are obsessed with daydreams,” he said.

He said BNP secretary general has recently given a statement to the media blaming Awami League for the murder of Jashore Jubo Dal leader. But BNP men were involved in the killing according the primary investigation and the case statement filed by the plaintiff, he added.

Qauder said BNP terrorists committed this murder due to their internal feuding to establish dominance in the party.

He denounced Fakhrul’s comment that the AL has established a fascist regime and politics in this country.

“The journey of fascism started in this country with military dictator Ziaur Rahman, who seized the state power in an illegal and unconstitutional way through assassinations, coups and conspiracies”, said Qauder.

He said Bangladesh Awami League is determined to establish the rule of law. The people are the only source of strength for the Awami League. “Today, the people of this country are united under the leadership of successful statesman Sheikh Hasina on the journey of development, progress and prosperity,” he added.

The AL leader called upon the BNP leaders to come to the path of welfare politics shunning the fascist mentality.