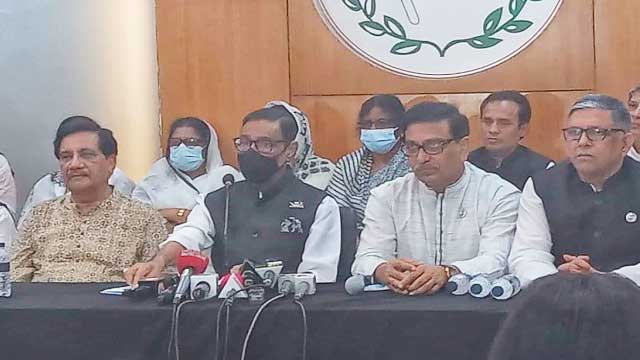 Awami League General Secretary Obaidul Quader on Thursday warned that if the Bangladesh Nationalist Party (BNP) resorts to any violence and arson terrorism in the name of movement, it will be strongly handled on the streets.

"If the BNP, as an opposition party, calls a peaceful movement, why will the government halt it?" he questioned while speaking at an emergency meeting at the AL Bangabandhu Avenue central office in Dhaka.

The meeting was arranged in observance of the AL programs announced marking the mourning month of August.

Addressing the meeting, Quader said if the BNP adds the elements of violence to its programs and carries out arson terrorism, the government will not sit idle.

He said their anarchy will be strongly dealt on the streets.

Capitalizing on the persisting global crisis, plots continue to oust the government, the AL general secretary said, adding that many people think the AL has forgotten the way how to handle a movement on the streets and it is not at all.

"You will see us on the streets soon. When the Awami League comes to the field, the movement will disappear," he said.