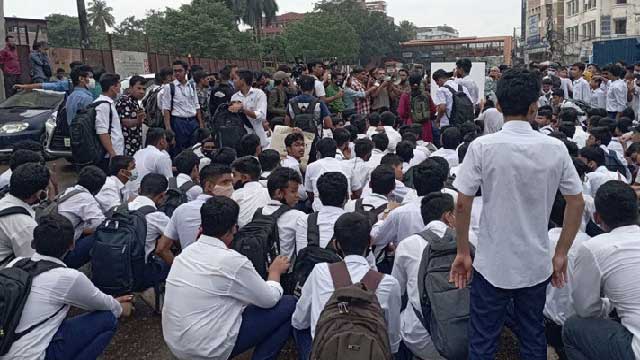 Students of Tejgaon Government Science School and College and other institutions have blocked Farmgate intersection demanding safe roads and justice over the death of a fellow student in a road crash.

The students put the blockade at around 12 noon chanting different slogans including ‘we want safe roads’ and ‘we want justice’. The movement of vehicles came to a halt creating a huge traffic gridlock.

On his way to Farmgate, Ali Hossain, a government science college’s class X student, died after being hit by a private car in front of BG Press on Sunday.

Protesting his death, students of science college, Government Science School and Tejgaon College started to gather in front of Al-Raji Hospital in Fargate at around 11:30am. Later, they take blocked the road at around 12 noon. The law enforcers tried to persuade them to end the blockade, but the protesting students did not budge.

Tejgaon police said the private car involved in the accident has been seized. They tried to assure the protesters of taking legal measures against the driver. Alongside the police, the teachers of the science college also tried to persuade the students to clear the road, to no avail.

Deceased Ali Hossain’s friend Tajwar Rahman told Prothom Alo that no one took his friend to the hospital for 15 minutes after being hit.

“No one took him to hospital. Ali Hossain might have survived had he been taken to the hospital on time.”

He also said the students want safe roads so that no one had to remain fearful of losing lives in a road accident.