The hand that wants to beat us will have to be broken, Hasina asks AL men 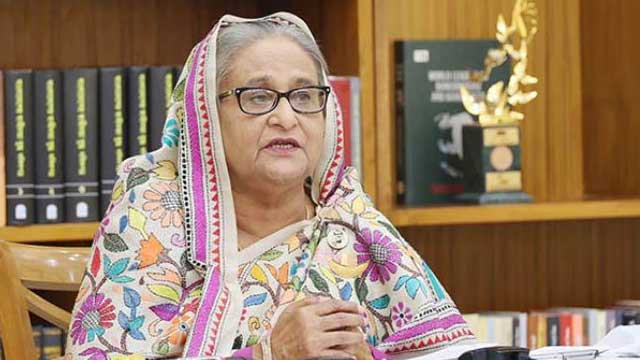 Prime Minister Sheikh Hasina yesterday ordered her party leaders and activists to stay vigilant everywhere and hit back if anyone tried to attack them.

The PM made the remarks while addressing a joint meeting of the AL and its associate bodies at the AL headquarters on Bangabandhu Avenue. She joined virtually from the Gono Bhaban.

"Our leaders and activists should remain prepared in every area so that they cannot resort to torture anymore," she said, reports BSS.

Hasina said, "The media who are now queuing up [behind the BNP] ... so many of the channels … they are here thanks to me ... If I hadn't opened it up, many people would not have had jobs. Many would not have been able to do business too.

"These media would have been taken to task or beaten up if they had written anything against [the then ruling party]. Even then, why so much flattery? I have no idea. I'll see how servile they can get. Those who are now trying to curry favour with the BNP, we will see to them."

She directed AL men to put forth the picture of how the BNP-Jamaat had carried out attacks on the innocent.

Let the people be informed what the BNP-Jamaat clique can do to destabilise the country, she said, adding that it would not be wise to endure torture sitting idle.