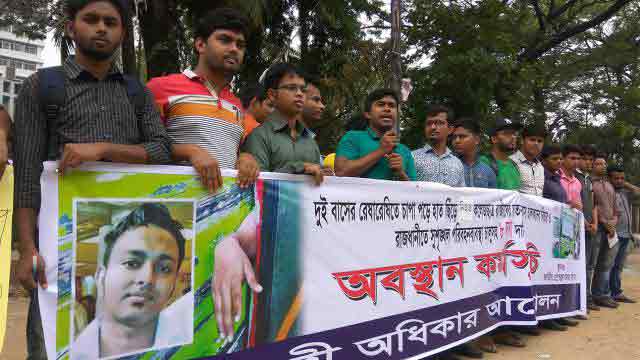 Dhaka, Apr 17 (Just News): Terming Rajib Hossain's death a “murder”, a rights group this morning staged a sit in in front of Jatiya Press Club in Dhaka demanding the highest punishment for the drivers of the two buses between which Rajib’s right hand got stuck.

The third-year student of Government Titumir College succumbed to his injuries, which also included a brain haemorrhage in the accident on April 3, died early today at Dhaka Medical College Hospital.

Drivers of public transports in the capital are so reckless that people's lives meansnothing to them, JatriOdhikarAndolon said in a press release today.

On April 3, Rajibwas going to attend his classes by a double-decker bus of Bangladesh Road Transport Corporation (BTRC). He was standing on the rear gate dangling his right hand outside as the bus was overcrowded.

When the bus got stranded at the Sonargaon crossing near Panthakunja park, a 'SajanParibahan' bus tried to make its way through the narrow space on between the BRTC bus and the footpath. However, Rajib's right hand was pressed in between the two buses and got severed from the elbow.

The organisation came up with an eight-point demand at the press conference, which are:

1. The killers of Rajib should be given capital punishment. A law should be formulated keeping the provision of death for all road accidents.

2. To control over traffic jam and prevent road accidents and to ensure proper passengers service through stopping getting on and off a vehicle indiscriminate.

3. Implement the government-fixed rate of transport fare including 50% fare cut for students in city and intercity public transports. Students should get a 25% fare cut in long route transports.

4. Steps should be taken against "sitting service" buses which run under various names.

5. There should be a balance in public transport fare. All vehicles should keep the fare chart and those who collect excessive fare should be punished.

6. BRTA must conduct effective drives on a regular basis to stop anarchy in the public transports. Security for women should be ensured and if any woman gets harassed, punitive action should be taken against the culprits.

7. AC and non-AC bus services should be launched to reduce pressure of private transports.

8. People who suffered in road accidents should be brought under an insurance policy.

Earlier, a Dhaka court again rejected bail prayers of the drivers of BRTC and SajanParibahan buses responsible for the accident.

They are BRTC bus driver Wahid Ali, 35, and SajanParibahan driver Khorshed, 50. The two were earlier placed on a two-day remand each. They were sent to jail on April 16.