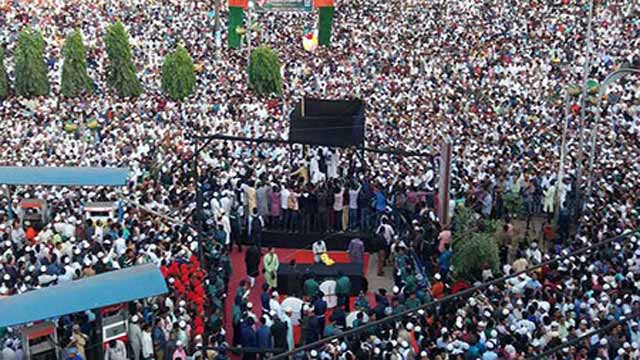 His namaz-e-janaza was held after Asr prayers on Laldigi Maidan in the port city. Mohiuddin Chowdhury passed away at city's Max Hospital early Friday at the age of 74.

He left his two sons, two daughters, wife and a host of relatives, friends, well-wishers and political fellows to mourn his death.

President and prime minister Sheikh Hasina expressed shock and grief at the death of the renowned politician.

They expressed profound shock and condolence at the death of Mohiuddin and prayed for eternal peace of the departed soul and conveyed sympathy to the bereaved family members.

Recalling his contribution to the country and its people, they said the loss in his death is really irreparable to the country's political arena.

Chowdhury, one of the organisers of 1971 liberation war had been suffering from heart and kidney complications for long. He was put on life-support at the Max Hospital at Mehedibagh in the port city on Thursday evening.