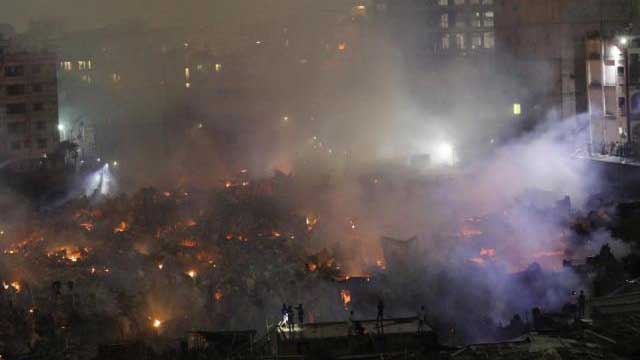 At least four people were injured and over 1,000 shanties were gutted as the devastating fire that broke out at Chalantika slum in Dhaka’s Mirpur area has been brought under control.

A total of 24 units of firrefighters brought the blaze under control at around 10:35pm, over three hours after it originated at the slum around 7:20pm on Friday evening and soon engulfed the shanties there, said sources at Fire Service and Civil Defense control room.

The fire-fighting units are still on the spot located at Mirpur-7, working to douse the blaze till last reported around 11:00pm.

Three persons were injured in the incident, said Tarun Kanti Sikder, additional secretary to the Security Services Division under the Ministry of Home Affairs.

More than 1,000 shanties of the slum were burnt in the fire, our staff correspondent reports quoting fire service officials and local people on the spot.

The slum dwellers claimed that nearly 1,500-2,000 shanties were damaged in the fire.

Abdul Gafur, a shop keeper, said the fire originated from a shanty near his shop.

However, the cause of the fire could not be known immediately.